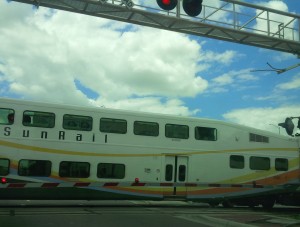 SunRail celebrated its one-year anniversary of service at the beginning of the month, as ridership fell well below the daily average goal once again in the month of April. The first year featured a lot of hype and public relations, but reality reveals many challenges after a mixed performance year.

April’s latest drop in ridership signals just one of many challenges presented for the struggling SunRail. Over the first year, the daily ridership average was almost 3,700, about 600 short of the 4,300 passenger goal. Fare box revenue for SunRail totaled only $2,077,806.69 in the first year of service, covering May 1, 2014 through April 30, 2015.

According to FDOT, SunRail reports fare box revenue consistent with other systems around the country and said, “systems around the country report to the National transit data base fare box revenue as all revenue in including limited use media/one day tickets, all SunCard transactions, tenant railroad user fees, marketing, ancillary development, etc.” The total is strictly detailing Monday through Friday service and does not include special events payments.

But the $2 million fare box revenue for year one is telling, especially when considering SunRail finished its first year $27 million in the red, while spending more than $34 million. The expenses will become a major problem for local governments, including the City of Orlando which is already plagued with budget problems from overspending, debt and redevelopment projects.

The overall plan for SunRail also seems to be lacking a true direction. Local officials including Mayor Dyer and Orange County Mayor Teresa Jacobs often boast about SunRail and flirt with expanded service, especially to the new soon-to-be-built airport intermodal transportation center. The same local officials encourage potential weekend service, even though SunRail is set up as a commuter train. But none of the officials want to talk about specifics for the future or funding the rail service when local governments take responsibility for costs in a few years.

Also, while SunRail is getting $93 million more to expand service into Osceola County, the federal government recently denied funding for the planned phase 2 SunRail extension to DeLand. Volusia County is scrambling to find the $35 million for “Phase 2 North,” and will likely still be on the hook for its future obligations with half the promised stations and service. It is even possible local officials will push forward with the airport extension before a DeLand expansion secures its own funding. This could create local tensions and further funding issues.

SunRail has not transformed local transportation after one year, which is not surprising. There are many reasons commuters and potential riders are not totally on board with SunRail. The first year was marked with riders questioning convenience, timing and connections to reach final destinations from the stations. The service also did not relieve road congestion, although with the I-4 Ultimate project beginning officials are sure hoping more drivers will opt for the train in year two.

At the one-year anniversary, the Orlando Sentinel’s Dan Tracy reported Mayor Buddy Dyer saying SunRail has been “across the board an overwhelming success” during its first 365 days. Dyer, who chairs the SunRail board, continues to be one of the biggest cheerleaders for the commuter train, but he has yet to start a community discussion on funding a mass transit system and paying for future expansions.

The very next day, Tracy reported in the Orlando Sentinel how Dyer admitted “there have been no serious talks about expanded service between the state – which is covering train costs until 2021 – and the five local government agencies that eventually will take over the train. ‘I don’t know if the outcry is big enough yet,'” Dyer went on to say.

Well, nothing says “across the board an overwhelming success” like that, right?