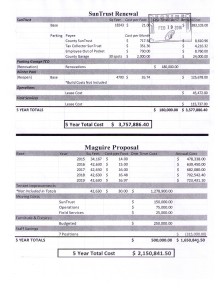 Tax Collector Scott Randolph submitted this document to the Board of County Commissioners, which is riddled with wrong numbers and fuzzy math.

I’m not sure how comforting it must be for Orange County taxpayers to learn that Tax Collector Scott Randolph is using some fuzzy math, with wrong numbers that simply don’t add up. In a newly recovered record that Randolph presented to the Board of County Commissioners, it appears he is being deceitful and misleading at best or incompetent at worst. The document will also leave all taxpayers scratching their heads asking who made this and where is the accountability?

Just take a look for yourself. A Tax Collector that doesn’t know math?

Randolph addressed the County Commission last week, along with his controversial and high paid lobbyist, and was ready to pitch his big “cost-savings” idea about relocating the tax office and property appraiser to a new location off Maguire Blvd, a deal he has apparently been negotiating on his own. But even on a quick review, it is clear no one with a financial background would produce this kind of document, let alone to present it to County Commissioners.

Aside from the fact that the “comparison” Randolph attempts to make is nothing more than political manipulation of numbers that can’t even really be compared, the document is a complete mess. For example:

Under “Maguire Proposal” the tax collector lists five years of cost ranging from $478,338 in the first year to $723,431 in the fifth year. That base rent alone if you add up the totals is $3,225,841.50, although according to Randolph the total is apparently $1,650,841.50 (no idea where this number comes from). Then Randolph likes to just pretend that he will fire 7 people to save $315,000 as part of the “Maguire Proposal.” Those “staff savings” are not listed in the current situation so I guess they only get fired if the move happens, although I’m sure Commissioners could find plenty of “staff savings” starting with Randolph’s political hires who likely put this document together.

Then Randolph forgets the one-time cost he predicts for the Maguire Proposal – a whopping $1,278,900 expense for “tenant improvements.” While this cost is listed on the document, it disappears before the “total” at the bottom of the page. Then don’t forget the $500,000 in moving and furniture costs.

That would bring the realistic 5-year total for Randolph’s Maguire Proposal to a staggering $5,004,741.50 which is actually no real savings at all. It also seems to mean that the Winter Park office will not re-open and that “operations” and “field services” would cease to be a lease cost as well.

Even with the firing of 7 unlucky employees, the Tax Collector’s 5-year expense would be around $4.7 million, far higher than the $2,150,841.50 listed on the document. It’s also more than the 5-year total cost which Randolph lists as $3,757,886.40 for the current SunTrust location plus the re-opening of a Winter Park location, renovations at the current office and operations & field services costs that were not included in the proposed move.

So what does all this fuzzy math really mean? Either Scott Randolph is incompetent as Tax Collector, or Randolph submitted this to the Board of County Commissioners without reviewing it first. Which staffer put this together?

Or is Randolph trying to deceive Commissioners with his fuzzy math in an attempt to save his own $150,000/year salary as the consolidation debate looms? Don’t worry, I hear the County Commissioners weren’t buying what Randolph was offering and that they continue not to be impressed with what is coming from the Tax Collector office.

Clearly, this is not a serious financial document. It is an amateur attempt and it must be political. It is misleading and I’m a little surprised Randolph would put something like this on the record while his office is already in the hot seat.