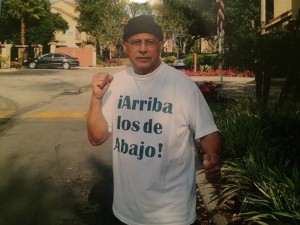 Elias “Rico” Piccard was an activist, community leader and inspiration to many in the greater Orlando area. State law designates a portion of Semoran Blvd to honor Rico, but the City of Orlando has yet to approve the installation of the memorial markers.

The request to follow state law may seem simple, but the political wrangling is just beginning.

Last year, the Florida legislature approved legislation, signed by the Governor into law, providing honorary designations of various roadways and transportation facilities while directing the Department of Transportation to install suitable markers. State Senator Darren Soto successfully designated a portion of Semoran Boulevard (SR 436) between the Beachline (SR 528) and the East-West Expressway (SR 408) as Elias “Rico” Piccard Memorial Highway. However, the designation still remains stalled to this day, waiting for a simple action by the Orlando City Council to implement the state law.

So last week, local residents descended on City Hall and urged the Orlando City Council to finally pass a resolution for the installation of memorial markers for Latino activist and community leader Elias “Rico” Piccard. All of the public comments were entered into the official record and City Commissioner Tony Ortiz did respond to the residents during the exchange (find all videos below).

Gaining more equitable treatment for Puerto Ricans and Latinos was one of the goals Rico fought for throughout Central Florida. His impact to our community was substantial and a void still remains in his absence.

Rico was also a Vietnam Veteran and always carried his pride and dedication to other causes. In 2011, he spoke out with Victor Torres, now an elected state representative, about the importance of Social Security for veterans ahead of Memorial Day weekend.

But Rico’s most important work was the work he did on behalf of his local community, neighbors and friends. Rico founded Frente Unido 436 (or United Front 436) in order to advance the rights and quality of life for the Puerto Rican and Latino community and based around Semoran Boulevard (SR 436). The organization’s work continues today, but Rico is responsible for the rise of Frente Unido.

Rico was everywhere locally. He would support progressive causes and defend his community. He was a frequent guest on local talk radio programs and covered local news himself to ensure the community had information about important issues. There was no enemy or obstacle too big or intimidating for Rico. If he found injustice, he was ready to stand for change.

Rico often stood up to the forces of City Hall or the Orange County Commission when many would remain silent. In 2001, he took on the Orlando Sentinel after a series of articles mischaracterized his community. Most recently, Rico was passionate in the community’s fight against Orange County’s redistricting, an ongoing struggle for representation at the county level. Rico understood the importance of politics in the struggle for equality. He was one of the most active volunteers for local campaigns and was a champion of voter registration and voting.

The Orlando Sentinel remembered Rico as “one of the loudest voices for the Puerto Rican and Latino community of Central Florida” in their obituary. Rico’s dedication and work was widely recognized even outside of the local community. “Rico’s smile, passion and knowledge of street smarts will always be the image I have of him,” said Juan Cartagena, President and General Counsel of LatinoJustice, a national organization litigating precedent-setting impact cases across the country and training young people to be leaders in their community. “His legacy will live on in the hearts and souls of Orlando people.”

There really is no excuse for the City of Orlando to continue dragging its feet on this simple, but important matter for the community. Mayor Buddy Dyer and City Commissioner Tony Ortiz are the two obstacles preventing the honorary designation.

Doug Head speaks on the record at City Hall about recognizing Rico Piccard.

John Pardo speaks on the record at City Hall about recognizing Rico Piccard.

Trini Quiroz speaks on the record at City Hall about recognizing Rico Piccard.

Zoraida Rios-Andino speaks on the record at City Hall about recognizing Rico Piccard.