You are here: Home › Transportation › Orange County Optimization of Commute Times a Mix of Art & Engineering 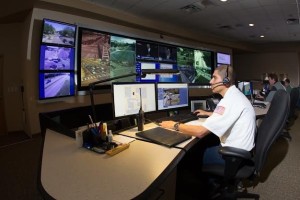 There’s nothing worse than getting stuck at red light after red light when getting around the metro Orlando area. Commuting in Orlando can be beyond frustrating, but there is a glimmer of hope helping make commute times safer and more efficient for drivers throughout unincorporated Orange County in the Public Works Division.

Orange County’s Traffic Management Center (TMC) “is the eyes of the County working behind the lights to optimize commute times for drivers throughout the region,” according to Mayor Teresa Jacobs’ administration. Six dedicated employees at the TMC manage traffic signals throughout unincorporated Orange County and interact with field devices to troubleshoot problems and change light timing depending on traffic conditions. Mayor Jacobs believes the TMC helps the County run more efficiently and states citizens benefit with less commute time.

There are 110 live traffic monitoring cameras at key locations throughout the county and the Center helps optimize the flow of traffic at intersections. The county’s TMC also maintains all school zone flashing beacons for Orange County Public Schools. The cameras do not record traffic patterns currently, according to officials. There are 600 traffic signals in Orange County and 225 miles of fiber throughout the traffic signals.

Project Manager Hector Bertran described the TMC workflow as a “mixture of art and engineering,” a balancing acting that combines engineering, state-of-the-art technology, predictability and efficiency. As the region’s most populous county and with 13 towns and cities located within our county borders, Orange County is hoping to increase public awareness of the TMC’s efforts.

For the past decade, the Traffic Management Center has operated five days a week, for 12 hours a day, but TMC staff are prepared to work additional hours to assist the booming tourism industry when needed. For instance, when the Orange County Convention Center brings in large conferences like the Home Builders Show, attracting more than 100,000 attendees, TMC staff work during nights and weekends to effectively manage the additional traffic. The ability to remotely access signals is also critical to keeping things operating smoothly.

“During thunderstorm season, we have a lot of power outages and can usually get back up and running remotely within two minutes rather than sending a maintenance technician in the field, which can take up to 45 minutes,” TMC Operator David Rodriguez said. “In fact, almost 90 percent of our signals can be accessed remotely.”

TMC is funded predominately by federal grants, with the County making small additional contributions. A $3.3 million federal grant was recently awarded to help upgrade the equipment and expand the system capability to improve efficiency.

Some of that funding was earmarked for Adaptive Signal Systems, which uses input from field sensors to adjust the signal timing to fluctuating traffic conditions. These systems optimize the timing at intersections and along corridors to minimize delays. A new Adaptive Signal System was recently installed at Sand Lake Road and Orange Blossom Trail and Orange County officials say “the results are impressive.” Compared to previous traffic conditions, travel time was reduced by 14 percent and the average delay time was reduced by 37 percent.

Orange County officials are also reminding residents to be part of the process. If citizens observe a light malfunction or other issue, they are advised to call 311 so the problem can be fixed directly by the TMC team. The Center receives an average of four reports or inquiries per day. Orange County reports around 770 citizen calls from 311 to the TMC annually.

Orange County also understands the importance of working in a comprehensive way to address traffic issues in the region.

“We are working with other agencies in the region on a plan to interact more seamlessly in our traffic management efforts,” El-Asser added. “For example, State Road 50 includes not only unincorporated Orange County, but towns and cities of Ocoee, Orlando and Winter Garden.”

Optimizing the flow of traffic in Orange County is no small feat.

“I always like to let citizens know that someone is behind all the traffic lights to try to make their lives a little easier,” Business Unity Data Network Specialist Tony Albert said. “That’s a great job to have.”