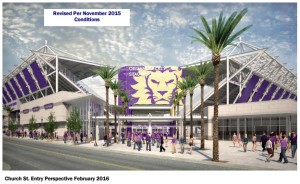 Last month’s Appearance Review Board approval of revised plans for the proposed Major League Soccer stadium pleased team leaders and city officials after several setbacks and delays over the last few years. Despite the long sought approval of the board, an official appeal has been filed requesting an independent hearing on the decision and further delaying the process. Lawanna Gelzer’s appeal and request for an independent hearing came after she expressed numerous concerns to the Appearance Review Board about the proposal and the impact to the surrounding neighborhood.

Gelzer attended the ARB meeting with Jonathan Williams of Faith Deliverance Temple in Parramore. Mr. Williams’ church is located right next door to the proposed entrance of the new MLS stadium, although the church has never been included in any renderings for the stadium proposal. “You can’t even see the church or how it applies to the church, the church right next door,” Gelzer said at the ARB meeting. “Once again, we don’t see the effects of this in this rendering, or any of the renderings, what it looks like in the community.”

There are obvious concerns about having the grand entrance to the MLS stadium literally right next to the Parramore church. “People are going to be walking on the property of the church right next door,” Gelzer added. There are long-standing community concerns about the impact to Parramore’s Faith Deliverance Temple. In fact, one ARB member raised a major concern back in 2014 that has still not been answered. “It’s just going to look funny to put this, what, 70 or 80 feet tall at its peak right next to a church?” the ARB member questioned. “And I don’t see how it works. It’s just strange.”

Gelzer also raised issue with the official process as well as possible bias in favor of the project proposal. She began her public comment asking, “Is this still a city project?” This remark referenced the introduction of the soccer stadium review by Shaniqua Rose, ARB Recording Secretary, who stated the owner of the project was still the City of Orlando [AUDIO]. Even the official minutes of the February meeting show the owner of the project as the City of Orlando. Doug Metzger, the city’s ARB coordinator, also stated at the meeting the project has “been around since 2014” [AUDIO] and reminded current ARB members they were only “amending an already approved certificate of appearance approval” [AUDIO]. It appears that city officials still consider the now privately owned and financed larger stadium proposal as the same project as the original smaller public venue proposal, instead of starting the entire public vetting and review process over.

Gelzer mentioned a related concern about the proposed larger stadium being built on the same plot of land planned for a much smaller stadium. “You even had some of your own members who are no longer on this board say, ‘You can’t put a size 13 shoe in a size 9 box,'” Gelzer told ARB members. “We’ve lost our street [Parramore Avenue]. Now it’s going from 19,000-seat facility to 25,000-seat facility. You can’t see the impact on the church. Most of the businesses are struggling now. I know that’s not your concern but it is the concern of allowing this project to even expand more.”

“You have guidelines,” she continued to the board members. “All the community is asking is that the same guidelines that you apply on all the other projects downtown, be applied to this project. And if they were followed, this project would not be allowed to be built. Simple fact.”

Gelzer also addressed the Appearance Review Board’s approval of the planned lighting for the stadium. The ARB members compared the stadium lighting to the downtown Performing Arts Center, which upset Gelzer. “That’s a commercial street. That’s commercial property. This is a residential community still,” Gelzer said about Parramore. “So maybe you need to look at how that will affect the residents that live in that area. We can’t always apply what is in a commercial area downtown [to] what is in this.”

“The effects of this project on that community are detrimental,” she told board members. Gelzer concluded her remarks to the ARB by saying, “And remember, you can’t put a size 13, now a size 14, shoe in a size 9 box.”

Not one single Appearance Review Board member or city staffer responded to any of Gelzer’s concerns and complaints about the proposal. Not one concern was addressed or discussed by the board. The ARB approved the revised stadium plans without any real discussion.

The City of Orlando has received Gelzer’s request for a quasi-judicial appeal hearing. The case has been assigned to Hearing Officer Susan Johnson-Velez, out of Tampa, though a date for the independent hearing has not been set at this time.

This is the third recent community appeal of city decisions, including one against the city’s planned Orlando Union Rescue Mission homeless shelter relocation and another against the city’s approval to build two industrial warehouses while destroying protected wetlands and part of the Wekiva River Basin, showing growing tension and increased complaints about the Mayor’s policies from residents and business owners.