You are here: Home › City of Orlando › Paulson Promises Big Changes for Orlando with Challenge to Mayor Dyer 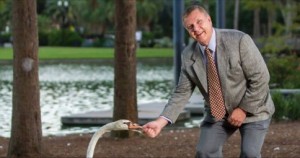 Veteran and businessman Paul Paulson is running for Orlando Mayor against Buddy Dyer with a vastly different vision for the city. Paulson also is not holding back on defining the differences between himself and the longtime incumbent mayor.

“I’ve never been arrested or indicted like Mayor has been,” Paulson said at the start of an exclusive interview when asked about differences between the candidates. Dyer was indicted in 2005 on voter fraud charges related to absentee ballots (Dyer’s mugshot here). “In fact, the differences are many. For starters, I was a prosecutor in the 1980s and enlisted in the Army to serve in the Cold War.”

“But at the end of the day, the good hard-working people of Orlando simply can’t afford Dyer,” Paulson added. “We’re being taxed to pay for Dyer’s opulence. High tax increases of 17.7% are not sustainable for the people living here.”

Paulson made it clear tax relief is his number one priority if elected in November. Paulson has been hammering Dyer for his 17.7% property tax increase last year to close massive budget holes. The property tax hike came along with significant cuts to public services and city department budgets.

“For me, the tax increase was really a breaking point,” Paulson said. “Our neighborhoods are being neglected and residents are being forced to pay for Dyer’s attempt to build an empire downtown.”

Paulson’s tax relief plan is central to his overall vision for the City of Orlando, which is almost completely opposite of Dyer’s vision. Paulson declared he will immediately roll back the Mayor Dyer’s 17.7% property tax increase. He also noted his tax relief plans would help renters as well as property owners, as renters end up paying higher rents after property taxes are raised.

“Prioritize, sunset and consolidate,” Paulson said about his platform. “I will ensure that the City of Orlando is focused on the four duties of a city: police, fire, utilities and streets and sewers.”

“We don’t have a budget problem, we have a spending problem,” Paulson said. “I will eliminate fluff from the city functions.”

He noted Dyer’s budget and expenses were “unbearable.” He also opposed a recent move by Dyer to increase Commissioner district budgets, which have been compared to personal slush funds. Dyer was the deciding vote in a split 4-3 decision to increase commissioner spending earlier this week.

Paulson also said many social programs were duplicitous between state, county and city service areas and many municipal programs need to be sunset. Paulson intends to reduce the duplication of services to save money. “We have two layers of government doing the same thing in many of these areas,” he added.

As one of his first acts, Paulson said he would form a blue ribbon commission to prioritize all city expenses based around the central question of what our community actually needs and actually uses. Paulson envisioned a large committee made up of appointees by city commissioners as well as members of the clergy. Paulson said he wanted people with their pulse on the community and the knowledge of what is needed and what is not being utilized.

“We have to live within a budget,” Paulson said. “That’s really the main difference between us. Dyer has been acting like he can use other people’s money to make himself look better and serve his own personal ambition. The rest of us all know we have to live within our budgets.”

Paulson said he would consider legitimate proposals for effective and affordable programs if the budget would be able to fund them without raising taxes and noted that would be one of the purposes of the blue ribbon commission. He said he would rely on the committee for recommendations for outside-the-box ideas to address ongoing problems and identifying outdated programs to cut from the budget.

“Orlando just can’t pay for it all,” he said. “We don’t have the tax base for all these expenses.”

Paulson also said he would seek annexation of surrounding areas to increase the tax base. He noted many people are moving outside of the city limits and into the suburbs to avoid increased costs, while still enjoying the luxuries of downtown, like the Orlando Venues.

He also said he believed many of Dyer’s financial supporters and political donors were benefiting, while local residents continue to lose. “We’re stuck with Dyer’s debt and his spending habits continue to be out of control,” Paulson said. “This is typical of his behavior and the people are not going to tolerate this anymore.”

“We need to retire and fire Dyer for not handling his checkbook,” he added.

For his part, Paulson admitted he has no political ambition like Dyer. Paulson said he has no aspiration to run for another office. “This does nothing for me personally,” he said. “Dyer’s personal ambitions leave the people of Orlando behind. My campaign is for the city and the residents to start changing things.”

Paulson described the response from local voters as “surprisingly refreshing.” He said many voters tell him Dyer has been in office too long and they are happy to have a choice on the ballot.

“Someone has to stand up and defend our city,” Paulson said.

In his campaign, Paulson is also taking on Dyer directly over several hot-button local issues. Addressing historic preservation and specifically the Tinker Field situation, Paulson said the City of Orlando needs to list to its citizens more before demolishing buildings. He believes more transparency and dialogue must happen moving forward.

“I’m not quick with a bulldozer,” Paulson said to counter himself from Dyer. “Tinker Field should be used by the neighborhood and kids with baseball and softball being played there again.”

This week, Paulson expanded his aim at Dyer, hitting the mayor for his opposition to Uber and Lyft. “The Mayor’s 17.7% tax increase is just the tip of the iceberg,” Paulson posted to supporters. “Why does he keep harassing Uber & Lyft?”

Paulson also took offense to a recent article by the Orlando Sentinel, which Paulson called “Sentinel garbage.” The Sentinel article attacked Paulson shortly after candidate qualifying with information and questions about Paulson’s charity and background. During campaign season, the article seemed like an obvious hit piece pushed by the Dyer campaign, although Orlando Sentinel reporter Jeff Weiner insists that claim is not accurate. Weiner has said no one from the Dyer campaign had input and no one associated with Dyer tipped him off. The article was a result of Weiner vetting a new candidate’s credentials.

“They tried to slander my reputation,” Paulson said, adding that he understands the nature of politics and has already let it go, but that it was disappointing. To Paulson’s point, the Sentinel has not gone as in depth into red flags raised about Mayor Dyer’s finances, debt or spending as they did in the Paulson article, let alone during campaign season. 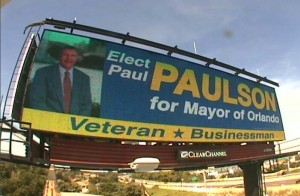 Paulson indicated he has a plan to get to victory on Election Day. “You will see a blitzkrieg and it will build fast,” he said.

The campaign has already launched a TV commercial, which also aired during the recent Republican Presidential Debate.  There are also billboards on I-4, yard signs starting to pop up in neighborhoods and a candidate who is out there working hard to gather votes. Paulson, who is a registered Republican, also has been campaigning to Republican voters in a letter campaign targeting absentee ballot voters. Dyer has regularly relied on the Florida Democratic Party for hundreds of thousands of dollars in contributions, including sending mailers, providing staffers and other campaign activities.

Paulson entered the race to give Orlando voters a choice in the snap election called by Mayor Dyer. He remains positive and hopeful about his chances ahead of November 3rd.

“With the passion God has given me, I think we can take this to the finish line,” Paulson concluded.

UPDATED: This story has been updated to reflect the position made by Orlando Sentinel reporter Jeff Weiner about the article in question by Paulson and to refute the claim that the article was “obviously a hit piece pushed by the Dyer campaign.” Click here for a link to Jeff Weiner’s Orlando Sentinel story: Review of Dyer challenger finds Florida Bar issues, charity ‘red flags’