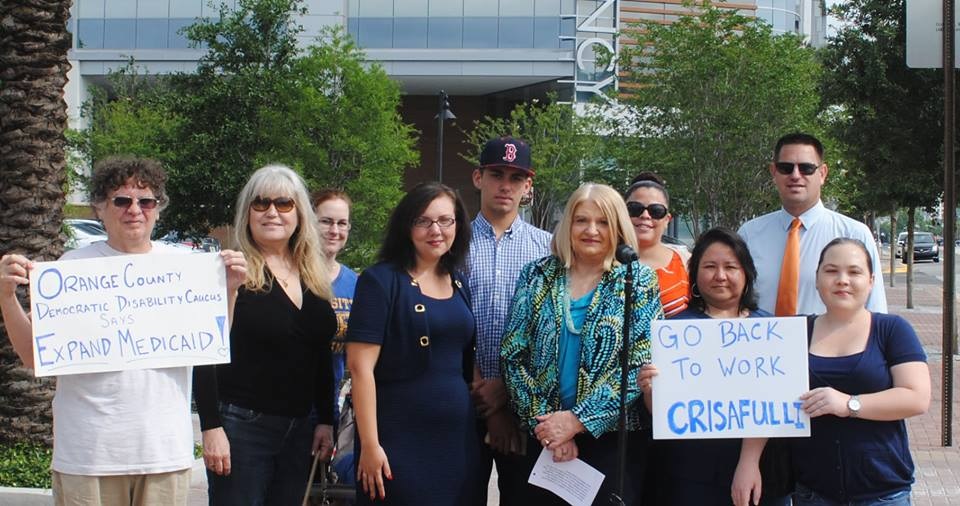 The Orange County Democratic Disability Caucus protested the failure of the state legislature and local Republicans last month. Tomorrow, the OCDDC will rally once again across from Orlando Regional Medical Center demanding healthcare expansion from the legislature.

The Orange County Democratic Disability Caucus is keeping the pressure on Republican legislative leaders and plan to host a press conference and healthcare expansion rally tomorrow on the patio of DOC’s Streetside Grille across from Orlando Regional Medical Center. The rally will take place at 10am on the 27th and will continue to protest the failure of the state legislature to pass comprehensive healthcare reform for Florida’s citizens to close the coverage gap.

“Healthcare expanison is not only a Disability issue. It is not only an uninsured issue,” said Tiffany Namey, OCDDC President. “Healthcare is an economic issue, an everybody issue, and should not be a partisan issue.”

Last month, the Orange County Democratic Disability Caucus hammered local and state Republicans, including State Rep. Mike Miller, just one day after the Florida House adjourned without a budget and without passing healthcare expansion desperately needed. The Republican decision to walk out on Tallahassee means the legislature continues to deny 800,000 Floridians access to health care by refusing to accept Medicaid expansion money from the federal government. In Orange County alone, an estimated 252,402 residents are uninsured.

“That is why you will see people coming together from all different counties, all different races, ethnicity, orientations, financial status, ages, and walks of life to say the government works for us,” Namey added. “We are the people and we demand healthcare now!”

“The Caucus’ role is to give a voice to the 2.5 million Floridians living with visible and invisible disabilities and I am honored that state leaders have chosen Orange County to be the stage for those voices,” Namey said.

Florida is facing a deficit of 2.2 billion dollars in federal funding because Governor Rick Scott and the Republican majority in the House failed to make healthcare a priority. The State Senate worked across the aisle to come up with SB 7044 as a possible compromise solution, but the State House refused to propose a companion bill or create an alternative.

“There’s always opportunity to compromise, to open discussion, and to throw in the towel and not allow yourself to have that conversation is not leadership.” said former House Member Linda Stewart.

The Orange County Democratic Disability Caucus’ role is to empower residents living with disabilities, visible and invisible, their loved ones and caretakers to have a voice in legislation and policies and to promote candidates that together will lead to healthier lives and strengthen the constitutional ideal that all Americans are entitled to life, liberty and the pursuit of happiness. To find out more about the Orange County Democratic Disability Caucus, visit them online.