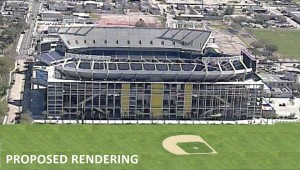 The laughable proposed rendering by the Orlando Venues of a cleared site with only a baseball diamond remaining. If the controversial proposed ordinance passes on Monday, this will be Tinker Field’s fate.

Mayor Buddy Dyer and the Orlando Venues responded to a letter requesting more information about the fate of historic Tinker Field by Orange County Mayor Teresa Jacobs and County Commissioners. The County letter was sent at the end of January and included seven questions seeking clarification on Tinker Field and concerns raised by residents.

The City’s response to Mayor Jacobs’ letter did not include much new information. In fact, some might argue it did not provide any real answers to the questions posed to the City by Orange County. Some basic answers are given, but the one-page response is clear on a few things pertaining to Tinker Field’s future.

The response from Orlando Venues Director Allen Johnson does shine light on Dyer’s ultimate plan for the historic site ahead of a key motion looming at Monday’s City Council meeting. First, the Venues director admits the reason historic Tinker Field site, another city-owned and operated public venue, is facing demolition and “repurposing.” The memo begins, “As the design of the Citrus Bowl was finalized, the footprint of the stadium was expanded beyond the original footprint of the Citrus Bowl and into the outfield of Tinker Field.”

Johnson’s memo soon makes it clear baseball is not part of the City’s plan in the future if the motion moves forward on Monday. In the memo, Johnson states “City staff undertook a due diligence process to identify options for the future of Tinker Field. This process resulted in the following key findings: – Baseball was no longer the primary use of Tinker Field.”

Later, the memo details exactly what the proposed City ordinance would mean for the historic site. “With the designation, the City of Orlando would remove the grandstands and repurpose Tinker Field (infield and outfield) to maintain the historic field but allow the space to be used for festivals and other community events.”

As if it couldn’t get worse for residents fighting to save and preserve Tinker Field, Johnson’s memo outlines the insulting “commemoration” process which will place a historic marker somewhere on the former site. The memo describes “they will work with District 5 City Commissioner Regina Hill and the rest of the Orlando City Council to develop a historic marker and/or a display for the site that recognizes these significant events. A timetable for this activity has not yet been finalized.”

Commissioner Hill already currently chairs a task force that has failed to provide any suggestions towards incorporating Parramore’s history and culture into the controversial Major League Soccer stadium. Just last week, Commissioner Hill would still not answer any phone calls or emails by WFTV about her work to preserve and remember the history and culture for that project. No wonder a timetable has not been set for the Tinker Field memorial.