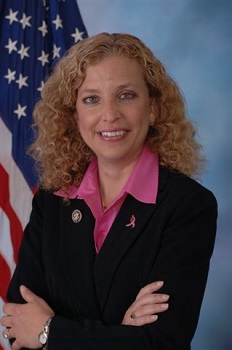 Some big Florida political news came out of Washington DC last week when Nathan Gonzales, Deputy Editor of the Rothenberg Political Report, was quoted after a conference saying, “Everybody in DC assumes Debbie Wasserman Schultz is running for Florida Senate in 2016.”

Nathan L. Gonzales is political editor of The Rothenberg Political Report, a nonpartisan political newsletter covering U.S. House, Senate and gubernatorial campaigns, as well as presidential politics. He has been with the Report for over nine years and is also a contributing writer for Roll Call, the Capitol Hill newspaper.

Earlier this year, Congresswoman Wasserman Schultz denied she would challenge Marco Rubio for the Senate seat if he ran for re-election, however much of Washington still believes the Democratic National Committee Chairwoman will run. Rubio also could give up his seat to make a Presidential bid, opening the door for Wasserman Schultz and other Democrats to jump in should they not want to challenge Rubio himself.

All signs on the ground signal Florida Democratic politics are currently “all about Debbie” including her insistence on her long-time friend and political ally Allison Tant becoming FDP Chair. Many Florida Democrats remain frustrated at the party leadership for seemingly dropping the ball during this 2014 midterm cycle, instead turning their attention to waiting for the Democratic wave to come in 2016.

Wasserman Schultz herself also seems to be jumping ahead, looking towards 2016 instead of the 2014 midterms. DWS told “Meet the Press” last month that the midterm elections were not a referendum on President Barack Obama, telling David Gregory that “candidates have to run their own race.” At the same time, DWS added that a 2016 Hillary Clinton presidential bid would benefit candidates nationwide (including her?). “I’m confident that Hillary Clinton is going to be helpful to our candidates across the country. That’s something that I’m entirely comfortable.”

DNC Chair Wasserman Schultz was also behind the Secret Democratic Redistricting Effort in Central Florida, indicating that former Congressional candidate Val Demings’ Run for Orange County Mayor is also a back-up option waiting for 2016. It would seem this too could benefit a future DWS Senate bid as she locks up future support from the critical I-4 corridor.

Since “everybody in DC” assumes DWS is running for Senate, maybe it’s time to have that conversation here in Florida. Unfortunately, her own ambition could come at the immediate cost of Florida Democrats and President Obama’s agenda in his term’s final years as the Debbie Wasserman Schultz show seems ready to run for U.S. Senate in 2016.