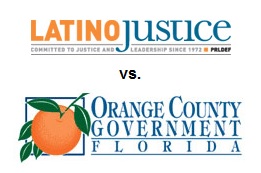 The redistricting lawsuit against the Orange County Commission represented by Latino Justice has been dismissed by U.S. District Court Judge Anne Conway. After only six days of testimony, Judge Conway ruled the plaintiffs failed to meet the burden of proof in their challenge. The ruling is seemingly a big relief for Orange County Mayor Teresa Jacobs and the County Commission.

However, Judge Conway never heard crucial testimony in the case before dismissing the challenge, including testimony from Zoraida Ríos-Andino, one of the lead plaintiffs, and Patricia Silver of the Center for Puerto Rican Studies in New York, a key witness for Latino Justice, among others.

“Redistricting is the most important issue affecting the Latino community of Orange County,” Zoraida Rios-Andino of Frente Unido 436 said in January prior to the case.  “Almost one-third of the Orange County residents are Latino and yet no one from our community sits on the seven member Orange County Board of Commissioners that decides on how to distribute the over 5 Billion dollar County budget. This translates into the lack of Contracts, Jobs, Social Service, Educational and Cultural programs needed in our Latino communities. Taxation without representation is not acceptable.”

Anne Conway was appointed to the U.S. District Court for the Middle District of Florida in 1991 by President George H. W. Bush and she has served as chief judge since 2008. The Republican judge did not immediately issue a formal written ruling, only a verbal one from the bench dismissing the case.

It appears Conway’s decision focused on citizenship and “voting age population” of Hispanic citizens, which seemingly got more attention by the judge than other factors in the challenge. In what some call false analysis, the judge abruptly ruled that Latino Justice failed to meet the burden in showing that a Hispanic “citizen vote age” majority district could be created. In addition, the judge ruled that the burden had not been met that a majority Hispanic district was needed in Orange County citing that Mildred Fernandez was elected in a district with less Hispanic voters than the current districts.

But under a redistricting plan offered by the public and supported by local activists, “Map E” would have created a district with Hispanic voters making up 49.3 percent of voting-age residents in District 3. The competing map also would have preserved the majority African-American District 6.

Despite the legal defeat and setback, Hispanic and Puerto Rican voters in Orange County are united in demanding a real seat at the table in the Orange County government. The ruling could also spark the community to make sure all Hispanic residents are registered to vote and that all Latino and Puerto Rican voters get out to the polls in August and November to make their voices heard.

In fact, some on the County Commission understand this as well. County Commissioner Ted Edwards has argued the lawsuit could have been avoided and he voted against Mayor Jacobs’ final redistricting map at the time saying it was inappropriate to dilute the Hispanic vote. The final map plan proposed by Mayor Jacobs was approved by a 4-3 vote. Now, some Commissioners are looking into supporting Commissioner Fred Brummer’s proposal which could lead to the creation of two new County Commission seats as a possible solution to bring Hispanic representation to Orange County.

No matter what, the fight for adequate representation continues in Orange County. It is clear the community will continue organizing, educating and demanding a seat at the table.