You are here: Home › City of Orlando › Artist Contacting Lawyers about City Destruction of $175K Sculpture 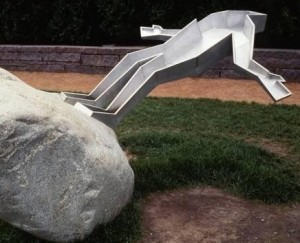 When he donated his $175,000 sculpture falloffstone to the City of Orlando, artist Peter Shelton never imagined his art would end up being destroyed by city employees and then the center of a three-year cover-up scandal by the Dyer administration. In fact, for years Shelton had tried to figure out what exactly happened to his sculpture, but top city employees including City Attorney Amy Iennaco, Orlando Venues Director Allen Johnson and public art coordinator Paul Wenzel created a cover-up full of lies told to the artist and the public.

Now, in part due to evidence and information obtained from an ongoing I Like Mike investigation, Shelton has stated he is contacting lawyers as his quest for answers from the Dyer administration escalates. Shelton said he believed it was “prudent for me at this point to share such specifics” with his representation.

“It really wasn’t ever a donation, now there’s a destruction,” Shelton had previously told me about what happened to his art. Shelton says he only donated his $175,000 sculpture to the City of Orlando if the city displayed it for public use, which the city never did. Based on a previous agreement, the City of Orlando is also required to assume all responsibilities and costs concerning the artwork.

But for more than two and a half years, Mayor Buddy Dyer’s administration had claimed the “missing” art sculpture had been stolen by thieves. City public art coordinator Paul Wenzel even filed a false police report in November 2012 claiming, “it was discovered vandalism had occurred” to the $175,000 sculpture by himself and Jason Klotz of Property Control. The incident was labeled as “criminal mischief” on the Orlando police report, but no investigation was conducted and no other police reports were ever filed on the case, according to records provided by the City of Orlando.

During my investigation spanning several months, I obtained information from city employees that did not add up to the official story being pushed by the Dyer administration publicly. Following tips and leads, I was able to expose the ongoing cover-up in City Hall. Despite two and a half years of claiming an unsolved crime at a city storage lot by “metal thieves” with no outreach to the owner and artist of the sculpture or any effort to restore the damaged art, the City of Orlando, under pressure of being caught in their own web of lies, finally began revealing the truth behind the missing sculpture.

After city officials finally admitted on the record the “missing” $175,000 sculpture was in fact destroyed by city employees who were instructed by an unnamed supervisor, more questions were raised about Dyer’s top staff being directly involved in the cover-up. The city’s risk management department did not follow city policy and reports and witness accounts were discarded.

The mounting evidence against city employees hit a pressure point during the November Public Art Advisory Board meeting, when angry board member Jim Lussier lost his temper and attempted to cut off public comment to silence the claims being made against the city. Other board members overruled Mr. Lussier and allowed the comments to be read into the official record. Lussier is a donor and personal friend of Mayor Dyer.

The latest revelations also expose how senior members of the Dyer administration blatantly lied to media outlets including the Orlando Sentinel and WESH News. Three months after the false police report was filed by the city, Risk Manager Ray Scullian, who makes more than $100,000/year at the city, pushed the criminal narrative to the Orlando Sentinel. “Regretfully, a metal thief went in with a saw and cut it away,” Ray Scullian, Orlando’s risk manager, told the Sentinel in February 2013. “Unfortunately, like a lot of other things around town … they just get taken and sold for scrap.”

That was a total lie by Scullian, and according to the Orlando Police Department, the risk management department was fully aware of what really happened to the sculpture in 2012. What other lies have Dyer administration officials been telling the media and public? So far, there’s still been no accountability from City Hall or the media outlets who published the lies.

During these years, the City of Orlando was also busy telling their lie to the artist of the $175,000 sculpture, Peter Shelton. Shelton has attempted for years to get answers about what happened to his sculpture and more importantly, Shelton wants city officials to repair his art and return it to its original state.

Sadly, it may be necessary for legal action to be taken against the City of Orlando and Dyer administration to bring resolution to this ongoing cover-up operation. Having been caught red-handed, the Dyer administration should do the right thing: tell the truth and restore the destroyed $175,000 sculpture.

Still more to come. Follow the unfolding scandal and latest updates from the investigation: