You are here: Home › Orange County › ‘War Against All Puerto Ricans’ Book Presentation Coming to Orlando 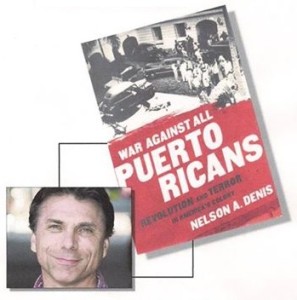 This Friday, author and film director Nelson Antonio Denis will be in Orlando for a presentation on his book, “War Against All Puerto Ricans: Revolution and Terror in America’s Colony.” The Misión Boricua will be hosting the book presentation by Denis on Friday, October 23rd at 6:30pm at the Polytechnic University of Puerto Rico (550 Econlockhatchee Trail, Orlando 32825). The presentation is open to the public at no cost.

“This is an extremely important event for the community,” said activist and community leader Zoraida Rios-Andino. “In order to understand and confront the many issues facing the Puerto Rican diaspora today, we must analyze and discuss the true history of the relationship between Puerto Rico and the United States.”

Denis tells this powerful story through the controversial life of Pedro Albizu Campos, who served as the president of the Nationalist Party, was imprisoned for twenty-five years and then died under mysterious circumstances. Through the story, Denis connects the dots to tell a larger story of Puerto Rico and US colonialism.

“Through oral histories, personal interviews, eyewitness accounts, congressional testimony, and recently declassified FBI files, War Against All Puerto Ricans tells the story of a forgotten revolution and its context in Puerto Rico’s history, from the US invasion in 1898 to the modern-day struggle for self-determination,” the Amazon book description states. “Denis provides an unflinching account of the gunfights, prison riots, political intrigue, FBI and CIA covert activity, and mass hysteria that accompanied this tumultuous period in Puerto Rican history.”

In addition to being a writer and film director, Nelson Antonio Denis is an attorney and former New York State Assemblyman. He was also an editorial writer at El Diario La Prensa, the largest Spanish language newspaper in the United States. The book is already seeing success across the country and in Puerto Rico.

“[Nelson Denis] provides scathing insights into Washington’s response to Albizu Campos’s nationalist party and its violent revolution in 1950 that still has broad implications…his perspective of largely overlooked history could not be more timely,” the New York Times review of “War Against All Puerto Ricans” stated.

Denis was born in New York City to Puerto Rican and Cuban parents. He graduated from Harvard College in 1977 and from Yale Law School in 1980. He was an attorney with the New York firm of Donovan, Leisure, Newton & Irvine.