You are here: Home › City of Orlando › Paulson Mailer Links Dyer to Rick Scott & Claims ‘Not Our Buddy’ 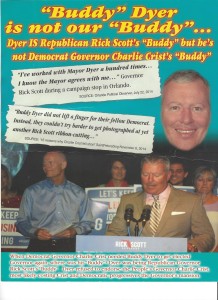 Which makes this whole thing more interesting considering Paulson is a registered Republican and has openly campaigned using his party label. Dyer has been busy attacking Paulson through mailers sent by the Florida Democratic Party and attempted to label Paulson as a “Tea Party Republican” in his literature. But in the latest mailer, Paulson is responding by blasting Dyer for his close relationship to one of Florida Democrats’ most hated politicians, Rick Scott.

Coupled with a photo of Dyer introducing Rick Scott at an event, Paulson’s mailer quotes SaintPetersblog, one of Florida’s leading political websites, “Buddy Dyer did not lift a finger for their fellow Democrat. Instead, they couldn’t try harder to get photographed at yet another Rick Scott ribbon-cutting…”

On the reverse side, Paulson asks voters “Is ‘Buddy’ Dyer our Buddy?” before blasting the incumbent mayor on a host of hot button issues.

“Not our buddy when he helps his millionaire Republican developer friends with all their downtown projects but neglects our neighborhoods,” reads one of the points in the mailer.

Paulson also claimed Dyer “uses Nixon’s ‘benign neglect’ philosophy on the west side of Orlando, neglecting Historic Parramore and selling off the land to his millionaire Republican friends.”

Those harsh words were accompanied by reminders that Dyer increased property taxes by 17.7%, which Paulson says is hurting the working poor, disabled and seniors in Orlando.

Paulson also zeroed in on Dyer’s demolition of historic Tinker Field. “Not our buddy when he refused to spend $10 million to restore Tinker Field for the community, yet spends $8.5 million in tax dollars to save one tree just blocks from City Hall.”

Finally, the mailer returns to the point made on the front, calling out Dyer for his refusal to endorse Charlie Crist as the Democratic nominee for Governor in 2014. “Buddy Dyer let Scott become Governor for another four years – let’s not reward Buddy with four more years as Mayor!”

Ironically, Dyer showed up to the local Orange County Democratic Party tonight for the first time in years. Just a few months ago, Dyer told the Orlando Weekly, “I get more crap from the left wing of the Democratic Party than I do from Republicans or the mainstream.” It appears he’s no longer taking anything for granted in the current election.

And it sounds like Paul Paulson is really upset Dyer refused to endorse Charlie Crist. Here’s a copy of the Paulson for Mayor campaign literature: 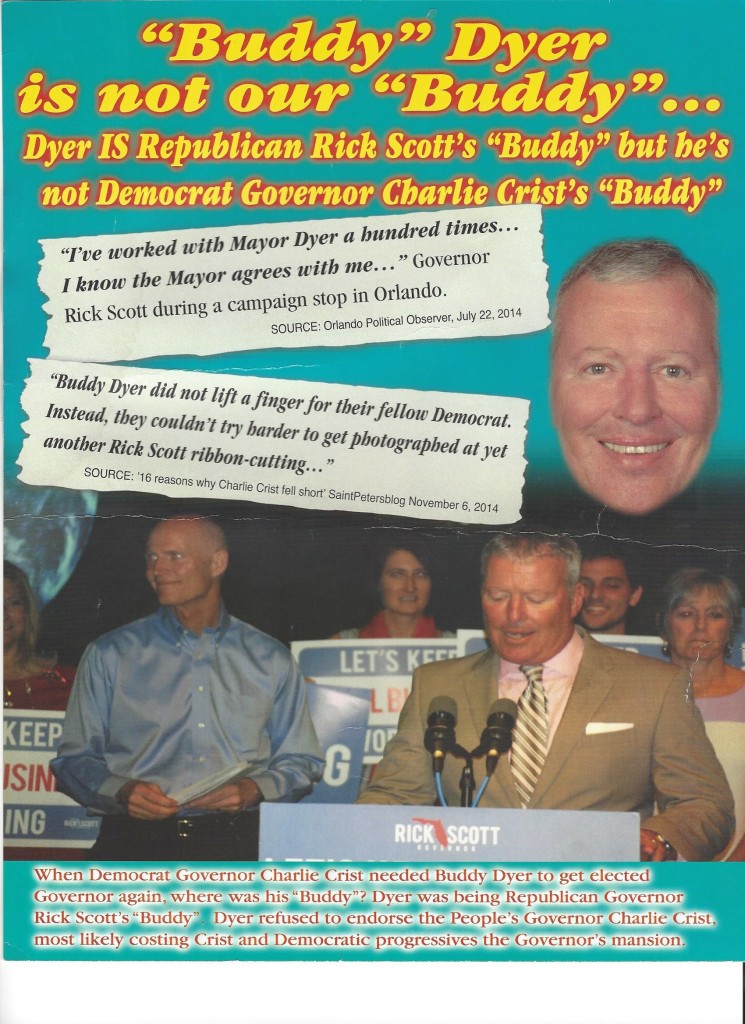 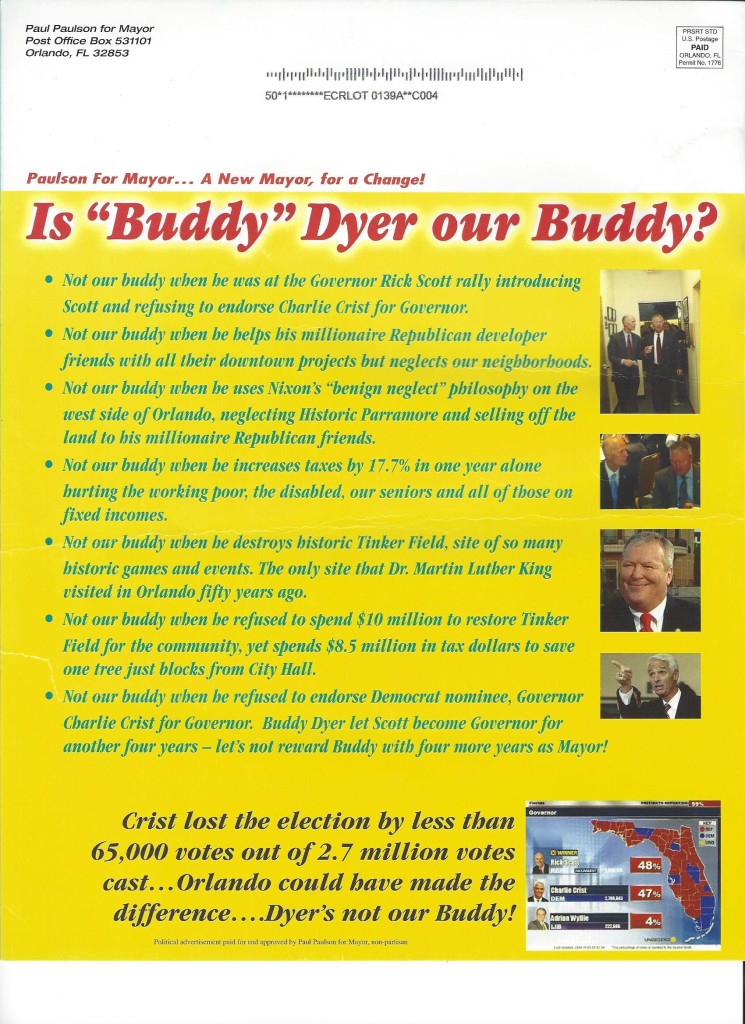