You are here: Home › Transportation › SunRail Ridership Down to Start Year 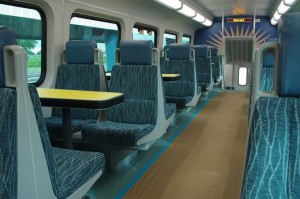 SunRail ended a lackluster 2015 with very modest gains in ridership during the fourth quarter. SunRail officials even began another round of new advertising last fall in hopes of boosting business riders. But it does not appear to have paid off for Central Florida’s commuter train, as ridership is down to start the new year.

According to the January 2016 conductor’s report, SunRail only had an average of 3,318 total riders per day, or about 1,650 round-trip commuters. That count reflects yet another decrease in ridership despite the slight uptick in riders during December, when the train had 3,664 total riders per day. It is also below the total number of riders in October and November, as well as most of last year.

One year ago, SunRail boasted an average of 3,789 total boardings per day, according to the January 2015 conductor’s report. Ridership is clearly not moving in the right direction.

In addition to the low number of total boardings, SunRail is struggling to sell significant numbers of passes for the train which could indicate a lack of interest from regular commuters in the business community. Last month, SunRail reported only 517 monthly passes were sold, signaling a very small group of regular riders. Looking at other key sales figures, only 246 weekly passes were sold and 319 reloadable SunRail cards were purchased by riders in January.

Despite major public commitments from influential business leaders and reassuring comments from local elected officials, something is not adding up. Back in 2014 when the rail service launched, the City of Orlando gave the Orlando Regional Chamber of Commerce $92,000 of taxpayer dollars to buy SunRail tickets and make it look like there was local demand. Even more public funds were shuffled to the Chamber for SunRail when the Orlando Community Redevelopment Agency gave another $50,000 to “promote SunRail” throughout the business community.

The Chamber purchased thousands of tickets with the public funds, inflating initial sales numbers. In fact, all the major business players in town were in on the game. The Orlando Regional Realtor Association, Orlando Magic, and other businesses known to show up on elected officials’ campaign contribution disclosures, all made “bulk purchases” of SunRail passes at the time.

On top of all this, FDOT spent more money on advertising last fall with nothing to show for it. So where is all the interest now from the business community?

SunRail has an even bigger problem than low ridership. SunRail continues to have a revenue-expense problem, and local taxpayers will be on the hook in just a few short years. With Orange County Mayor Teresa Jacobs and Orlando Mayor Buddy Dyer prematurely pushing for expansion and greater SunRail expenses, it should make the community wonder if anyone is actually paying attention to the numbers, looking out for local taxpayers or developing possible solutions to turn SunRail around.

Have you been on SunRail or plan to ride the train as part of your commute? Share your reviews, suggestions or concerns about SunRail in the comments.

15 Responses to "SunRail Ridership Down to Start Year"