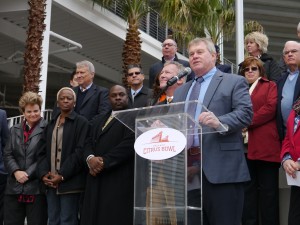 The entire process conducted by the Dyer administration, and specifically Allen Johnson’s Venues department, is now being called into question, as millions of public dollars were handed out to companies that appear to have been hand-picked by just a few people from Dyer’s inner circle. Johnson appears to have orchestrated a rigged bid process to benefit City Hall insiders, predetermined long before any public process was announced.

The bidding scandal involves Jay Berlinsky, a longtime friend and financial supporter of Dyer, and the Hunt Construction Group. Berlinsky, who joined Mayor Dyer in the city’s luxury suite for the Rolling Stones concert last summer, was awarded a no-bid contract in September 2012 to serve as the city’s representative during the stadium renovations. Berlinsky was paid more than half a million dollars, or $14,500/month for three years under the no-bid contract and was tasked to help the city select a project manager for the Citrus Bowl renovations. He held the same position for the city during the Amway Center construction.

Just two weeks before Berlinsky was awarded his no-bid contract by the Orlando City Council, he and Allen Johnson were meeting with Scott Blanchard, Vice President of Hunt Construction.

“Here is the information that I promised I would send on our interest to act as Program Manager/Owners representative,” Blanchard emailed to Johnson and Berlinsky on August 24, 2012. “Good to see you the other day, enjoy the weekend and please review this as we think we are the right partner for you having been the first flight through the Venues,” Blanchard’s email ended. “You got my contacts call with questions, comments or just to say hello.”

Attached to the email was a 27-page document titled “Citrus Bowl Renovation – Professional Program Management Services” outlining Hunt Construction’s qualifications to be Project Manager for the stadium, including proposed program management costs. “Thanks for taking the time to meet with me this week to discuss this exciting upcoming project,” Blanchard’s cover letter on the document reads.

Four months after Johnson’s meeting with Hunt Construction, the City of Orlando finally announced the Request for Proposal publicly on January 2, 2013. All other interested companies would have only two weeks to complete their proposals, as the due date was set for January 16, 2013. A pre-proposal conference was scheduled for January 9th to provide prospective proposers the opportunity to ask questions and receive clarification from City representatives about the RFP. Of course, Hunt Construction already had a personal version of this months before with Johnson and Berlinsky, the two key figures in the process.

More than 60 representatives from various companies attended the pre-proposal conference expressing interest in the Citrus Bowl stadium renovation project, according to the City of Orlando’s own sign-in sheets for the event. Little did these representatives know that Johnson and Berlinsky already knew what the outcome would be.

From this point, the process moved very quickly. Two days after the RFP closed, the Advisory Committee met to discuss the five sealed proposals submitted from URS Corp, Jones Lang LaSalle, FAnderson, Hill International and Hunt Construction Group. The Advisory Committee tasked with reviewing and evaluating proposals included only five people, four city employees and one representative from Berlinsky’s SC Advisors company. Two of the city employees, Michael Thompson and Ollie Rives, were direct employees of Allen Johnson, meaning three out of five of the votes were already in total control of Johnson’s and Berlinsky’s influence. Janerio Coulter, Special Projects Manager for the city’s BLUEPRINT program, and James Varnado, Treasury manager for the City of Orlando, were the other two members.

While not an official member of the Advisory Committee, Allen Johnson attended all meetings according to official minutes. At the first meeting, a motion was made by Ollie Rives, seconded by Michael Thompson, to have Brent Daubach perform reference checks and compile a summary of the proposals, according to the official minutes. Why would City of Orlando staff not perform these necessary checks and summaries? Johnson’s employees assigned Berlinsky’s company responsibility to rig the bid process.

On January 25th, the Advisory Committee met for the second and final time. After Daubach’s presentation, committee members reviewed and discussed the proposals and ranked Hunt Construction as the top bid.

A week later, City Commissioners voted unanimously to approve the ranking, despite some major concerns because of problems during the Amway Center’s construction led by Hunt, including long delays in paying some subcontractors. Subcontractors went unpaid for months after the Amway Center construction was finished under Hunt’s leadership. According to the Orlando Sentinel, the complaints were similar to those from subcontractors who worked on the Orange County Convention Center, a project led by a joint venture that also included Hunt. “It’s not good business or good oversight of the public dollars we’re responsible for to pay for work that hasn’t been completed, but we continue to push Hunt to close out their contracts and pay their subcontractors what is owed,” Orlando Magic president Alex Martins said at the time.

The Amway Center construction ended up millions of dollars over-budget. Less than one year after opening the brand new arena, the Amway Center’s spire began to rust. Hunt Construction needed to take additional measures to correct the problem.

“I hope they’ll do a better job,” was the only thing then-Commissioner Daisy Lynum could say at the time of the unanimous vote to approve Hunt Construction for the Citrus Bowl. Hunt Construction was awarded $2.4 million to be program manager on the stadium project, meaning Johnson or other Venues staff held further contact with the company prior to the public RFP to allow Hunt to revise their originally submitted bid from August 2012, which estimated $3.2 million in staff costs.

Of course, the rigged bid process was already a done deal long before the City Council weighed in. Buddy Dyer had orchestrated the entire process through his longtime friend Jay Berlinsky and his loyal, high-paid Venues Director Allen Johnson.

4 Responses to "Rigged Bid: Another City of Orlando Scandal Revealed"