New development continues all around downtown Orlando and it appears a hotel boom is in full force. Construction is showing that developers and city leaders have no problem encroaching right up on existing businesses (or churches as the new plans for an MLS soccer stadium prove).

Marriott is building a new 138-room Residence Inn at Orange Avenue and Colonial Drive that is ready to swallow Mama B’s Giant Subs, a location long known to locals. While the developer claims Mama B’s property is not part of any (current) plans, it is clear they are building literally up to the inch of the local restaurant’s business. And that could make things a little awkward. 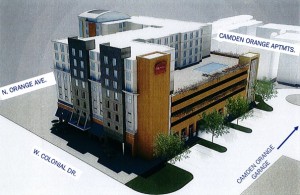 Mayor Dyer’s favorite developer Craig Ustler, who is also developing the stalled Creative Village project on contaminated land at the old Amway site, is also the developer of this latest hotel project. Ustler estimates the $21 million, seven-story project will be open sometime in 2015. Like many Ustler projects, this too was delayed from the original 2014 estimated opening. He’s also planning a large ground-floor restaurant, sure to be further direct competition with Mama B’s Giant Subs.

Because Mama B’s is staying put (for now), the hotel will take an “L” shape around the property at the corner of Orange Ave. and Colonial Dr. There is still little to no interest to invest in the Creative Village site, so it seems Ustler is staying busy with nearby projects.

This latest development is a sign that the City and developers will continue building in this way around town. Even the Dr. Phillips Performing Arts Center will see future development blocking the newly constructed facade. Dyer’s new plans to shift the MLS soccer stadium one block away from Faith Deliverance Church will mean the stadium is constructed just feet away from the existing church structure, like Mama B’s is facing.

In addition to the Marriott plans, Hyatt is moving forward hoping to develop a new Hyatt Place Hotel and SunRail station at Church Street Station. The Orlando Magic are also planning a hotel and conference center outside of the Amway Center, thanks to a bad deal for taxpayers the Magic made with the City to take the current police headquarters. Soon, the Orlando Sentinel site just across the street will begin a major redevelopment and environmental cleanup from its contamination.