Despite constantly touting Orlando as a hub of technology and innovation, the war between Orlando Mayor Buddy Dyer and ride-sharing companies like Uber and Lyft is about to enter a new phase.

“With the transportation networking companies here, it’s a whole new ballgame, so we’re going to have to evaluate every aspect of Chapter 55,” Dyer told the City Council a few weeks ago.

Last winter, Mayor Dyer attempted to force Uber and Lyft ride-share services out of the city. The Orlando City Council followed Dyer’s orders and unanimously passed an ordinance to regulate ride-sharing that Uber described as “written for taxi companies that don’t want to have to compete.” The transportation network company was referring to one of the Mayor’s and City Council’s largest political contributors and supporters, Mears Transportation.

But Uber and Lyft never once backed down even after Dyer’s actions. In response, Uber called Orlando’s legislation “deeply flawed” and declared the ordinance “simply doesn’t work.” The companies kept operating and the success has been clear. 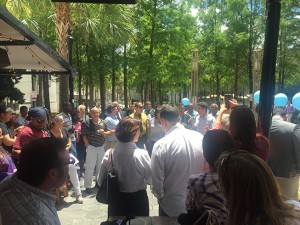 In June, Uber celebrated 1 year of service and 1 million rides in Orlando.

“To date, several thousand active Orlando partners have provided more than one million safe rides in the metro area, collectively earning more than $10 million dollars in the process,” Team Uber Orlando announced at their one-year celebration in June. Hundreds of Uber drivers, riders and partners joined at Wall Street Plaza in downtown in June to celebrate the more than one million safe rides on the Uber platform in Orlando.

The complete and utter defiance of Mayor Dyer’s attempts to stop or limit the new transportation technology was exemplified earlier this summer when Uber celebrated one million trips in Orlando, even with the ordinance in place. The technology networking company also delivered free cupcakes to residents to boost the public relations move and really make a statement to Dyer.

I doubt any free cupcakes made it to City Hall. In fact, Mayor Dyer has made it known he wants the Orlando City Council to target Uber and Lyft ride-sharing services very soon.

In a rambling statement from the dais earlier this summer, Mayor Dyer elaborated to his City Commissioners that enforcement would also need to be addressed “because the two companies in the market have not really complied.”

“I think we are going to have to continue to evaluate our whole vehicle-for-hire process given the technology-based companies and the fact no legislation passed [in Tallahassee], and what we’re going to do related to enforcement of those because the two companies in the market have not really complied with what I thought was a pretty decent way to handle those technologies,” Dyer told the City Council.

The feud between the City Council and transportation networking companies does not appear to be heading in the right direction at the same time our community is trying to highlight acceptance for technology and new innovations as well as support mass transit options like SunRail. Ride-sharing seem like natural partners in helping move residents and workers to and from SunRail stations when unreliable city infrastructure simply does not line up with the train service. SunRail ridership continues to struggle, yet Uber usage continues to grow. There should be a way to make both of these work together.

After more than one year of Uber service in Orlando, it still appears all sides are very far apart from working together or having a meeting of the minds. Dyer insists he has two major concerns with Uber and Lyft ride-share services.

“Probably the two most important factors for us are the safety of the traveling public, both visitors and residents, and then secondly, rides being picked up at the airport are about $10 million source of income that offsets landing fees to keep our airlines more economical for coming in, so that’s an important aspect as well,” Dyer insisted to City Commissioners.

“So, we’ll be looking at all that again, I suspect, in the next couple of months,” Dyer added.

If Orlando really wants to be a technology city of the future, our local leaders like Mayor Dyer must realize technology innovations like Uber have the potential to help transform daily lives, connect communities, spur economic activity and more. Our leaders need to be working with the technology of the future, not against it.