You are here: Home › City of Orlando › Orlando Refuses to Help Parramore as Other US Cities Move to Protect Against Gentrification 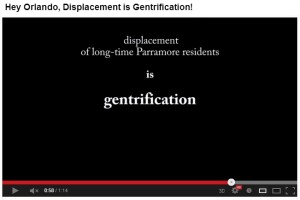 The NY Times ran a great piece about how major US cities are mobilizing to help residents threatened by gentrification, balancing their redevelopment and growth with important protections. Initiatives are focusing on reducing or freezing property taxes for local homeowners so they are not forced out by development, creating more neighborhood stability and rewarding long-term residents who stuck it out despite the hard times and lack of investment over the years. Sounds like a policy that could also help people in Parramore with what’s going on locally in downtown.

Meanwhile, Orlando Mayor Buddy Dyer refuses to help Parramore residents as his potentially unconstitutional billion dollar Venues projects continue to be built all around the area. The actions other cities are taking can easily be taken here in Orlando as a first step and a sign of good will from the City to the residents of the long-ignored downtown neighborhood.

It is also a much-needed step locally as the controversial and unnecessary “Creative Village” development alone will displace remaining Parramore residents with increased property taxes and higher rent as it is currently planned.

But reducing or freezing property taxes in Parramore is just the first step. The reality is that Buddy Dyer has been ignoring resident concerns while exploiting the demographics of the area to secure funds for his major redevelopment projects that are in fact gentrifying Parramore. Even outgoing City Commissioner Daisy Lynum admitted during City Council that the plan was to remove all minorities from the downtown area.

After my campaign, I co-founded the Fight Back Coalition with Lawanna Gelzer and concerned Parramore residents in order to protect and preserve Orlando’s historic African-American neighborhood. I have delivered these recommendations to city officials as well as other local elected officials including Orange County Mayor Teresa Jacobs, as well as local media. This will be accomplished with a larger strategic plan, but in short, Fight Back Coalition is fighting for 8 policies to help save Parramore:

1. First Source Hiring from the Parramore community – which also means City and County investment in necessary training and education programs in Parramore so that the local workforce is ready for the multi-million dollar projects coming to their area.

2. Freeze all property taxes for current Parramore residents, so they will not be impacted or harmed by future development in their neighborhood.

3. Homeowner support: including, but not limited to, Owner-Occupied Rehab prioritizing rehabilitation of owner-occupied homes through grants to low-income homeowners; Equity Protection Services prioritizing equity protection services to existing homeowners to help them resolve tax, title and mortgage issues; Condemnation-Free development so the city of Orlando will stop eminent domain to acquire property for redevelopment.

4. Renter support: including, but not limited to, Build Replacement affordable rental housing first: to minimize involuntary displacement, build rental property to house relocated residents until redevelopment is finished and they can return; Support for Tenants subsidizing housing in Parramore to include a plan to transition existing tenants into new, mixed-income housing and possibly into homeowners.

5. Inclusionary Affordable Housing for all income levels, and at adequate levels for Parramore residents. There should be a balance of all housing being developed in the Parramore community area. Projects should resemble a “one-for-one” replacement.

6. Gain Neighborhood approval of design plans and seek public input for guidelines of project BEFORE plans are approved or implemented.

7. Right to Return: Include an admission preference for all displaced residents to return to Parramore area to the greatest extent possible.

8. Neighborhood-Scale Retail: all commercial or retail redevelopment should include a balance of local, regional and national companies, but local small businesses and Parramore-owned businesses must be included.