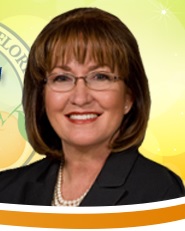 Orange County Mayor Teresa Jacobs did it again – stealing the show, flipping the issues and winning the day at the County Commission meeting this week. It’s no surprise that Mayor Jacobs quickly sent out a “Special Edition” Orange County Connect email where she began her victory lap. At the same time, her critics may be clinging to a small, temporary win, but likely a long-term loss.

Tuesday’s BCC meeting was one for the record books, all thanks to Commissioner Fred Brummer’s controversial all-in-one proposed county charter amendment. Brummer called for some major changes including redistricting the County Commission from six to eight districts in an attempt to satisfy a discrimination lawsuit by Latino Justice and the Hispanic community; imposing term limits and non-partisan status for constitutional officers; abolishing of the Office of Tax Collector; changing various aspects of the petition amendment process  in terms of ballot initiatives; and conducting a snap special election regarding the proposed measures via mail ballot in just weeks.

Ultimately, the meeting resulted in a decision by the Board to not move forward with a snap special election and instead to further discuss the proposed changes. A workshop will be held on April 8th, where the BCC will consider individual proposals and decide what measures should move forward to the ballot. Then, there will be a public hearing before any vote takes place. So it’s still moving forward.

And the whole thing showed Mayor Jacobs in complete control, while being reasonable, respectful and compromising – everything you need to be in a re-election year.

A record-setting 65 citizens lined up to give public comments on the proposed changes, participating in what Mayor Jacobs said “helped bring to life an extraordinary display of public engagement and discourse.”

Which brings me to Mayor Jacobs’ first victory. Mayor Jacobs proposed and led the effort pushing for public comments at the beginning of meetings as prior to 2008, the Orange County Charter did not provide a mandatory opportunity for regular public comment.

Mayor Jacobs was respectful, even to those who criticized her, and allowed every person to speak for their full-time. She was able to showcase open government at its finest, as she and Commissioners listened to hours of public testimony. The public comments were all over the place — everyone had a different piece of the proposal they opposed or various reasons to be against parts of it, while some were there in support. But they all got to speak their mind while Commissioners listened.

In her email update, Mayor Jacobs talks further about what that public comment charter change means, saying, “As a result of that Charter Amendment and of our unwavering commitment to serving the public in a transparent, professional and ethical manner, Orange County Government has a reputation for open and public access of which we can all be proud.”

See how Mayor Jacobs totally combats her critics’ “textgate” claims that she is not transparent or responsive to the community? Now Mayor Jacobs owns the issue as she can point to the exercise in democracy that took place in her chambers.

It is refreshing to see this locally, as Democratic Orlando Mayor Buddy Dyer turns off the cameras before public comments and ignores residents when they speak to his Council. Mayor Jacobs proved once again to be open and respectful, while championing the participation instead of discouraging it like others.

Mayor Jacobs was ready to flip the issues and take command from before the meeting started. She had copies of a prepared memo ready for everyone in the audience, clearly stating her positions on all the issues and opposing parts of Brummer’s proposal. At the same time, there was no clear coherent message of the opposition. The only real things all of the opposition to Brummer’s proposal could agree were that the package was too big with too many items in one amendment and that no one likes appointed officials or snap mail-ballot elections. But the comments were wide-ranging in reasons to oppose various parts of the proposal, including a good number of people who supported Brummer’s proposal.

Mayor Jacobs was able to be the only person who staked out her positions clearly, and she did it before any comments or discussion began. In a re-election year, where one definitely wants to control the narrative, Mayor Jacobs succeeded in flipping the issues in her favor while avoiding being branded negatively by any of the proposal. This also made some of her critics’ comments seem off-base and off-putting.

And that’s partly why I think Brummer (and Wade Vose who helped craft the proposal) wins in the end as well. This is politics, and we expect ideas and proposals from our elected officials. Brummer started the dialogue and with one proposal, as controversial as it may have been, he took over the local narrative. In politics, this is the way it works. He was just one retiring commissioner with one idea (more like 6-8 ideas packed in one), and everyone flipped out with reactions, but many tried to blame Mayor Jacobs. Now the opposition message is split, as every speaker had a different message/narrative and no real cohesion in message despite the large turnout.

That means yes, the public was able to eliminate the snap special election in a few weeks due to the comments – but was that a ploy all along? Did Brummer really want or need a snap special election? No, he wanted this ideas and proposals on the ballot, and they still may get there eventually. Now the BCC has conceded the special mail-ballot election (likely the most controversial part of the proposal) but Commissioners will still get to amend the charter outside of Charter Review Commission now. Brummer got things moving and now we are likely to see some of the proposed changes go to the ballot individually. This will help them add a few new items to the ballot and dilute the sick time question a bit when it finally shows up as well.

Also lost in all this, the important matter of Hispanic representation and redistricting. While no one wants appointed officials, the BCC seems open to funding special elections for potential new seats, but there were so many issues and so many different interests at play in the meeting that no real productive discussion on this issue took place.

All this flipped the issues away from what critics of Mayor Jacobs have wanted to talk about going into election season. With her special update email, Mayor Jacobs was able to articulate her detailed positions in writing with voters across the county. And don’t forget, she got to brag about the “Citizen Participation Bill of Rights” she proposed and passed.

Mayor Jacobs showed she is growing in her office and she is clearly more confident. Before, during and after the meeting, she showed her smarts and confirmed she is on her A-game.

Think about it. Mayor Jacobs was able to jump ahead of every issue. She displayed her leadership skills and showcased her open government process. In an election year, she fended off “big bad Republican” Brummer’s most controversial proposals (independent and soft Democratic voters will like that) and positioned herself in line with most public sentiment on most of the issues.

With individual votes on each measure now, she will vote no where she needs to and vote yes where she wants to. Most of all, she will be the one who allowed more time, more public comments and more transparency before sending the initiatives to the people to decide. And certain initiatives will move forward, as she adds, “I look forward to a continued discussion on the modified proposal.”

Mayor Jacobs’ positions and the modified proposal will likely continue to generate interest and public discussion, further diluting the larger Democratic (and Organize Now) message against Jacobs. It seems her critics like Organize Now and the Scott Randolph clique weren’t thinking long-term or about the bigger picture, only their own short-term special interests and strategy. They weren’t even ready to truly capitalize on this.

But Mayor Jacobs is ready. She showed it by winning the day.