You are here: Home › City of Orlando › New Urban Garden Proposed for City-Owned Lot in Parramore 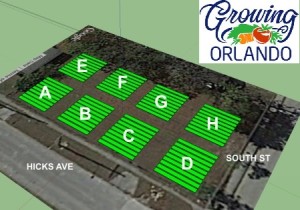 Rendering of a new proposed urban garden provided to the Orlando Municipal Planning Board by Growing Orlando.

Growing Orlando, a new non-profit urban farm initiative, is looking to develop their first urban garden on a city-owned lot in the Parramore area off South Street. The proposed development is scheduled for a public hearing at the Orlando Municipal Planning Board today.

“We’re addressing access to food in Orlando in 3 main ways – where we grow for you, teach you to grow for yourself, and help you grow for others,” said founder and Executive Director Brent Buffington. “We are establishing multiple urban garden sites to increase production and distribution of food grown in proximity of downtown, to teach Orlandoans how to grow food for themselves, and incubate future farmers.”

While the current proposal represents Growing Orlando’s first urban garden, there are big plans for the future.

“This site with the city is one of what will be many more to come in a multi-site network,” said Buffington. “Localizing growing and education into neighborhoods is our dream. With this site the city will hopefully be able to eventually pass an ordinance making it easier for all other interested urban farmers a clear path to starting their own.”

The urban garden site proposed for South Street and Hicks Avenue (626 W South Street) will not be used as a community garden like the one on Robinson. Growing Orlando plans to harvest and sell produce to local residents and restaurants through market stands and other direct sale approaches.

According to plans filed with the Municipal Planning Board, the food grown at the Growing Orlando garden will be made available to the public through direct sale at the Lake Eola Farmers market and to restaurants wanting to purchase from and support the organization’s mission. The plans also state Growing Orlando will be donating 10% of their harvest directly to organizations like Community Food & Outreach Center, Coalition for the Homeless, and other community support organizations.

“The sale of produce is intended as a way to keep some income coming back in for the non-profit to operate, and we are currently drafting out the lower cost ways to access the food including a membership similar to how Community Food & Outreach does theirs,” Buffington explained.

Growing Orlando has a long-term plan to find a viable location within Parramore to sell produce directly to local residents. In the meantime, Growing Orlando reminds residents the Lymmo Line runs through Parrmore and drops off directly at Lake Eola, providing a free way to show up at the Eola Market on Sundays. Growing Orlando is also investigating how to accept SNAP/EBT at their market stand and is developing a workershare program for certain consistent volunteers who can exchange their time for produce credit.

Education plays an important role in the organization’s mission. Growing Orlando will also use this garden site to host workshops and learning opportunities for local residents. Growing Orlando will maintain the site as a demonstrable example of urban growing techniques for the entire community. “The education for us is ultimately the main driver, equipping Orlandoans with the ability to grow food for themselves, and to help teach those who want to grow on a larger scale for others,” Buffington said.

“For us, our mission is centered around food access and a big thing Orlando lacks is food producers,” he added. “While we’re not going fill the supply, we are going to help contribute by way of growing and being a point of access and awareness.”

In this way, the site would act both as an area for food growth and hands on learning. According to the plans filed with the City, Growing Orlando expects the impact on the surrounding community to be quite influential. “While a focus is to increase access and proximity to locally and organically grown produce to the community there are beneficial impacts beyond food alone,” the plans state.

Growing Orlando is also aware of issues and concerns regarding contamination, specifically throughout the Parramore area. Growing Orlando stated each site explored for an urban garden will always be thoroughly tested to ensure safety, looking for any pre-existing residues from prior residential or industrial buildings. They also plan to share the important information with residents. “We plan to teach out everything we’ve learned in this process to encourage development of other urban garden sites,” said Buffington. “This includes raising awareness about soil testing.”

While still early in the process, once the South Street urban garden site is established, Growing Orlando hopes to begin more development plans to expand the multi-site network. Buffington said there are already other leads and interest in the community. Future sites will not necessarily rely on city-owned lots either. “We do not plan to use only city lots, in fact it would probably be a lot easier for us to work with private owners,” Buffington said. “This process with the city tends to take a very long time.

“After demonstrating the success at this location, we know it will help move forward some of the other conversations we’ve been having with other potential sites.”