You are here: Home › City of Orlando › MLS Stadium Faces Major Opposition from City Board 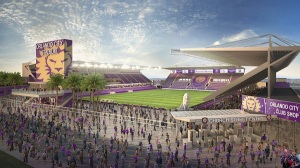 The City of Orlando Appearance Review Board slammed the new proposed MLS stadium design on Oct. 16th, citing they were “disappointed” and “underwhelmed,” needing more details before clearing the project for approval.

The new Orlando Major League Soccer stadium project is facing more major opposition, this time from the City Appearance Review Board. The surprising, and harsh, criticism from board members raises big questions about the design, cost and schedule of the project. The Appearance Review Board sits at the heart of the approval process needed to finalize the controversial Venues project.

While officials who pushed the controversial stadium like Mayor Buddy Dyer and Orange County Mayor Teresa Jacobs were at the “groundbreaking” yesterday, the City board stated they were “underwhelmed” and “disappointed” in the design and proposed location. It is clear the proposed MLS stadium has a lot of work to do before next month – and it is now clear the cost will be going up.

The Orlando City soccer team requested a “courtesy review” of their proposed stadium designs from the Appearance Review Board – and just because the team is “buddies” with Mayor Dyer, the meeting did not go their way.

Huge hostility emerged during the October 16th meeting. There were cries from members that the soccer stadium design looked “cheap.” Others asked why the stadium is “disrupting Parramore?” and questioned the Mayor’s decision to shift to the West. The Appearance Review Board stated they were “disappointed and underwhelmed.”

The meeting also included a revelation from the city planner that the proposed MLS stadium will not be occupied 90% of the time. That’s right, this new “public” venue being built with public tax dollars will sit vacant for 90% of the time based on the official report from the City of Orlando to the Appearance Review Board. This led many to question how the stadium will be neighborhood-friendly for the historically African-American Parramore community? While the team and elected officials were hoping the design would be the answer, board members sure shot that down.

Lamb added about the project, “not a whole lot of wow for me.”

Chairman Greg Witherspoon agreed his Board would need “much more detail” and stated his opposition to the building materials being proposed by the team. Witherspoon opposes the use of stucco in the design. Board member Matt Taylor agreed saying “stucco is a non-starter.”

Lemons asked “what makes this a 21st century building?” Lemons was one of the most pointed with his criticism and questions. He also displayed the depth of his experience and knowledge throughout the discussion. “What makes this special?” he wanted to know.

Lamb also wanted to know “what can make this interactive?”

Only one member, Jeffrey Bush, jumped in to defend the stadium’s encroachment on historic Parramore. The ongoing gentrification of Parramore continues to be a hot topic in the community. In fact, there has been ongoing controversy connected with the proposed MLS soccer stadium since the idea was first introduced at the City and County levels.

But Walter Hawkins, Orlando Director of Urban Development, became agitated by the Appearance Review Board. He claimed “citizens have had the opportunity to give their concerns.” His statements reflect an arrogant attitude from Dyer’s City Hall and seem to imply the controversial and very expensive proposals from the City should not be questioned.

But it looks like people are finally done with the rushed attitude coming from Mayor Dyer for this controversial project. The Orlando Appearance Review Board was highly critical of the rushed re-design proposed by the team and rightfully so.

The MLS stadium is already delayed and behind schedule after Dyer’s sudden decision to shift the location two months ago. Dyer made the move at the last-minute in order to avoid losing an eminent domain attempt against Faith Deliverance Temple. In addition to all the other expenses, the City of Orlando has already spent millions on an inflated land deal to secure the needed land and will waste millions filling a retention pond on the site which was recently constructed at a taxpayer cost of $5 million. WFTV recently exposed the City of Orlando is also taking on an additional $106 million in debt to pay for the MLS stadium and other Dyer projects. The proposal has faced significant community opposition within Parramore as well.

How will the team make the necessary changes in just one month before the next Appearance Review Board meeting? How will all these changes impact the proposed budget and plan for the community? When will the community get to weigh in? It is impossible for the public to understand the impact to Parramore without full transparency and set plans for the project.

The Appearance Review Board members are not the only ones still looking for more details and answers about the proposed MLS stadium.