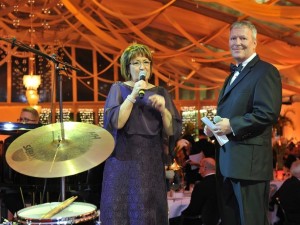 Orange County Mayor Jacobs just can’t wait to spend more public money. Yesterday, Jacobs sent Orlando Mayor Buddy Dyer a letter attempting to capitalize on news the soccer stadium will be privately funded and owned by the MLS soccer team. Mayor Jacobs is now pushing for more public tax dollars to finish the Dr. Phillips Center for the Performing Arts, which continues to struggle with private fundraising. The unfinished venue has not even started the second phase of the performing arts center.

Mayor Jacobs’ letter focuses in on “one piece of unfinished business” when she asked Dyer to join her in using public tax dollars to once again bail out the DPC board who failed to meet their private fundraising goals. But Mayor Jacobs issued a statement following up on her letter to Dyer to clarify.

“Before specifying any dollar amount, there’s some work to be done,” Mayor Jacobs said. “As a starting point, we’ll be meeting with the Dr. Phillips Center (DPC) to identify what the expected shortfall is, and then, obviously, we’ll need to have a discussion with our Board of County Commissioners, the Tourist Development Council (TDC), and of course, the City of Orlando.”

Mayor Jacobs also went further to promise an open and transparent process, if the public even believes that is possible at this point with the Venues projects. “There are many steps ahead of us, but knowing that the completion of the second and final phase of DPC remains unfinished, I would hope that this community will come together to fulfill this vision,” Jacobs said in her statement. “I’m looking forward to a completely transparent, public process.”

Mayor Jacobs did provide a look at her idea for spending the tourist tax money. In her letter to Dyer yesterday, Jacobs states, “it is my hope that the City and County can step up and help bridge the financing gap by partnering on a 50/50 basis and applying a portion of the money previously earmarked for the construction of the soccer stadium.”

That may not sit well with City or County residents who are growing tired of the continuous handouts to the Venues projects and the ever-increasing final price tags. While DPC did announce a $12 million private contribution today, nearly $50 million more will be needed to close the “financing gap” as Mayor Jacobs calls it.

Earlier this year, there were reports signaling crisis ahead of the DPC opening. The arts center had previously missed several fundraising deadlines, resulting in numerous additional hand-outs from the County and City tourist tax dollars. Already, Stage 2 is in deep trouble, as noted by Mayor Jacobs. To finish Stage 1, the Orlando City Council authorized an additional $751,067.99 in construction funds due to “the extension of the estimated completion date of Stage 1 of the DPC.” However, the terms stated clearly: “The increased funding will result in less project construction funds available for Stage 2 of the Arts Center.”

All of this is on top of the other crucial funding demands. The Arts Center is also busy raising funds to build their endowment as well as to fund art education and engagement activities. In addition to the capital campaign (construction), the Dr. Phillips Center committed to raising $25 million within 5 years of opening for its endowment to ensure the long-term stability and success of the performing arts center. At the end of last year, only $2.2 million has been raised in the endowment. The DPC also needs to raise funds for art education programming either through grants, private donations or through sponsorships.

At least the community can count on a “completely transparent, public process” with Jacobs’ latest request, right?