You are here: Home › City of Orlando › Dr. Phillips Center Gets Another $750K from City, Impacts Stage 2 Funding 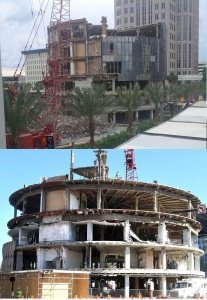 The Round Building’s slow demolition was ongoing during the Dr. Phillips Center for the Performing Arts grand opening.

As the Dr. Phillips Center for the Performing Arts continues celebrating its grand opening, it’s not hard to notice the project construction is not complete. The venue officially opened on November 6th, although the funding problems that have plagued the downtown venue also persist as construction extends. The Round Building’s slow, ongoing demolition despite the festivities is another symbol of the delays, missed deadlines and added costs.

Three weeks ago, the Orlando City Council authorized an additional $751,067.99 in construction funds due to “the extension of the estimated completion date of Stage 1 of the DPC.” The City approved the additional funds by amending the original Orlando Performing Arts Center Agreement from June 20, 2007.

A Central Florida Foundation report from December 9th states: “The art center needs to raise additional funding for Phase 2. The main component of Phase 2 is the construction of the 1,700-seat multi-form Acoustic Theater, which will be the new home for our local resident arts organizations the Orlando Philharmonic and the Orlando Ballet. Phase 2 also includes large rehearsal rooms, Seneff Arts Plaza, and deferred components from Phase 1.”

There have been many questions about the additional phases and full completion of all theaters at the new Arts Center for quite some time. This is just the latest setback.

But there are other critical funding demands on the Dr. Phillips Center. The Arts Center is also busy raising funds to build their endowment as well as to fund art education and engagement activities. In addition to the capital campaign (construction), the Dr. Phillips Center committed to raising $25 million within 5 years of opening for its endowment to ensure the long-term stability and success of the performing arts center. Currently, $2.2 million has been raised in the endowment, according to the December 2014 report. The DPC also needs to raise funds for art education programming either through grants, private donations or through sponsorships.

Ironically, while the latest funding request will further jeopardize Stage 2 of the Dr. Phillips Center, it may be welcome news to fans of the historic Bob Carr Performing Arts Center. According to the City of Orlando’s Creative Village Master Development Plan, Bob Carr’s future includes an ultimate demolition, but only upon completion of Stage 2 of the Dr. Phillips Center.

The Dr. Phillips Center notes in the December report they anticipate completing all construction in 2018.

Plans are also being rolled out for the next phase of development to the overall site location, which includes a possible hotel development and parking garage on the north parcel along South Street. The latest rendering is further proof that Orange County Mayor Teresa Jacobs and Orlando Mayor Buddy Dyer exaggerated the “green space” when they unveiled renderings of the Performing Arts Center site back in April.

The reality has always been more development around the new Performing Arts Center, not green space. Models show what the downtown site will eventually look like with the added commercial development. The development is a critical component to the funding mechanism for the overall development of the Dr. Phillips Center site.