You are here: Home › City of Orlando › Mayor Cuts Hours to Avoid Obamacare: Dyer’s Debt Taken Out on Employees 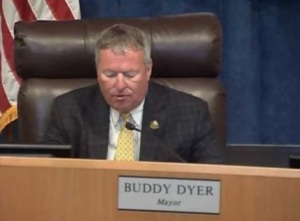 Orlando Mayor Buddy Dyer, Democrat, is cutting hours of certain city employees to avoid Obamacare and having to provide healthcare to the workers.

In a shocking development emerging from Orlando City Hall, Democratic Mayor Buddy Dyer’s administration is reducing hours of public employees classified as “seasonal” to 29 hours per week, to cut costs and avoid providing healthcare benefits under Obamacare, according to sources at the City. The “seasonal” classification is really a misnomer, as most of these employees work all year, some even for many years. Dyer and the City prefer the classification in order to keep them from being covered by union contracts.

The City also previously prevented these “seasonal” employees from working more than 39 hours per week to avoid having to pay health insurance. Now that the Affordable Care Act will require health insurance for workers working an average of 30 hours per week, the City of Orlando, under a Democratic Mayor, is reducing hours of some public employees to 29 hours/week in light of the ongoing budget crisis. Dyer is also cutting $11 million from police and fire budgets along with raising taxes and fees on residents.

Chambercrat Dyer’s latest decision means not only does the health of uninsured workers and their families suffer, but we all end up paying more for workers without health insurance when they are forced to wait and go to emergency rooms. Dyer is also essentially cutting the pay of employees and questions remain if this is just the beginning of a larger impact the City will soon feel in response to the budget cuts.

Buddy Dyer is balancing his out of control fiscal mess on the backs of the hard-working city employees who help build and maintain the City Beautiful. All workers impacted by any of Dyer’s cuts should apply for unemployment and get some compensation due to reduction in hours.

What does it say to have one of Central Florida’s high-profile Democratic elected official using such tactics to avoid the ACA and benefits these workers and their families need? How will City Commissioners react? What about Democrats?

As this is breaking news, stay tuned for more information and details as they emerge.