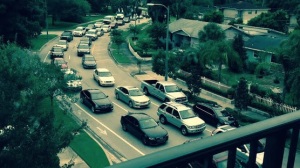 For months, Mayor Buddy Dyer, City Commissioner Robert Stuart and others have pushed a controversial College Park development from Atlanta-based Pollack Shores RE Group that would drastically reshape the neighborhood. College Park residents have been agitated by the plans, and one online petition currently has more than 1,300 signatures against the planned development, called The Princeton at College Park.

Yesterday, the Orlando City Council split on the matter in a very close 4-3 vote, but ultimately called on the out-of-town developer to slightly change plans before a final vote on October 20th for approval. New City Commissioner Regina Hill proved to be a needed swing vote by the Mayor and Commissioner Stuart. It appears Hill may be shaping out to be a vote for the Mayor and it seems she will support massive, unnecessary development across the city, not just in her home district and Parramore where gentrification also continues.

The split vote shows continued pressure for the Dyer administration, which normally does not witness dissent from the typically rubber-stamp Council. The changes may not be enough for community residents who oppose the added high-density development, the dangerous precedent it could set and the impact of changing the nature of the College Park community. It will definitely bring more traffic, possibly more crime, and current residents could be forced out of their homes by foreclosure or pushed out of the neighborhood because of climbing rents.

This new development will spill over more traffic onto Edgewater and surrounding neighborhood streets that already demand more attention and infrastructure repairs by the city. With the City of Orlando’s ongoing budget crisis, resources are being cut for infrastructure, road repairs, and from police and fire – and this development could make matters worse locally in College Park.

Despite the amendment to scale back the development, the developer will likely only need to cut 20-40 units from the plans. Still, Pollack Shores claims this could impact the profitability of the project so much they may no longer move forward. Pollack Shores is known to build-and-resell to maximize private profits, basically a pump and dump scheme to build an apartment complex and then sell it to the next buyer and cash in, with no regard to long-term planning and quality of the development.

Concerns that have clouded this controversial development will likely continue ahead of the final vote in October. Commissioners Patty Sheehan, Sam Ings and Tony Ortiz voted against the development proposal.

You can get all the Orlando City Council information here. You can directly contact Commissioner Robert Stuart, who covers College Park, by calling him at 407-246-2003 or emailing him at Robert.Stuart@cityoforlando.net.