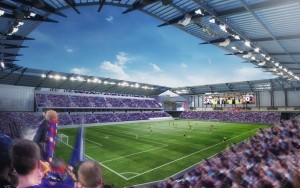 Today, state legislators delivered a major setback for Mayor Buddy Dyer and the Orlando City Lions who are trying to use state funds to complete plans for their new Major League Soccer stadium. The Joint Legislative Budget Commission met today with an agenda to decide how to award $7 million in public funds to sports venues around the state seeking stadium upgrades; however, the panel instead they tabled the item and postponed a decision.

Orlando’s proposed MLS stadium is competing against three other venues for a cut of the state’s $7 million prize. The four proposals total a wish-list of $9 million, meaning someone is going to be the loser. The Daytona International Speedway, the Miami Dolphins (Sun Life Stadium) and the Jacksonville Jaguars (EverBank Field) are all vying for the public funds against Orlando’s MLS stadium.

Mayor Dyer traveled to Tallahassee this week and was busy lobbying legislators for votes ahead of today’s meeting. One state representative reported support for Orlando’s MLS stadium was in trouble and that Dyer was personally reaching out to collect enough supportive votes. Dyer fell short as clearly there were not enough votes for passage.

Representing the Fight Back Coalition and the National Action Network, Lawanna Gelzer and M.L. Spradley attended the meeting to raise concerns of the Parramore community to legislators before any decision was made. The two were prepared to speak on the record with comments, petitions and details of the concerns from residents in the historic African-American neighborhood where Dyer is forcing the soccer stadium to be built.

Dyer’s stadium proposal will only create 60 permanent jobs according to the official application before the state. The soccer team hopes to use millions in state funds for party terraces, more bars and a larger roof structure.

Dyer and the soccer team will continue to lobby and attempt to make back-room deals during the remainder of the legislative session. The Daytona International Speedway is going to push back against Orlando and scrap for the dollars. The community coalition fighting for Parramore also intends to remain very active and in regular communication with state legislators during the upcoming process. To be continued.