As the debate continues on funding the controversial new stadium in Orlando, there have been many misrepresentations by Orange County Mayor Teresa Jacobs and the soccer team in their presentations and support for the proposal. Many of the concerns have been outlined in memos to the Commissioners, but here are some of the details including some public records.

First, there has been very little public vetting of this issue and even members of the Tourist Development Council said they received the proposal just days before they were to vote on it. It has been very difficult to gather any information or data that is reliable so that Commissioners can properly evaluate the proposal and many have complained about that as they weigh in through memos. But despite what Jacobs is claiming, the fact is that no data or information exists to support what is being said by the soccer team, city of Orlando or lobbyists pushing for new stadium funding. Even a Visit Orlando presentation titled “Major League Soccer: Impact Analysis of Selected Areas” to the Orange County Mayor admitted “little specific evidence of incremental visitation drawn by sports teams could be found.” And where there is no data – there is no “economic impact.” 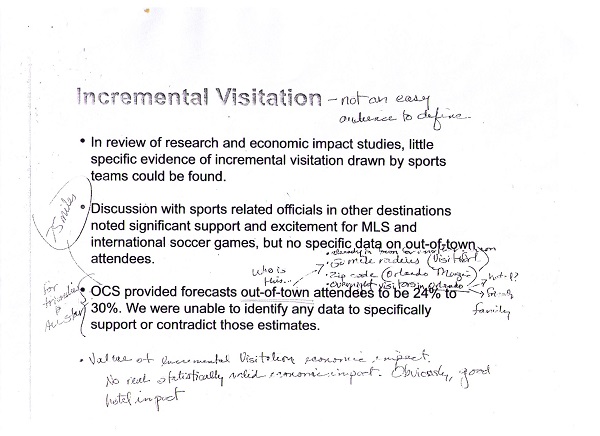 Slide from Visit Orlando presentation sent to Mayor Jacobs, but not shared publicly in presentation or at the Board of County Commissioners meeting.

There has also been a lot of misinformation regarding “All-Star” games and International games promised to Orlando in the future, adding to the “economic impact” being claimed by Jacobs and the team. Emails to Orange County Mayor Jacobs from Orlando City Soccer President Phil Rawlins directly state they cannot guarantee an All-Star game within the first five years and that “if not in the first 5 years, then certainly soon thereafter.” This means much of the data being presented to the BCC has been misrepresented and the economic impact has been exaggerated. Also, note the city of Orlando and the team expected this insider deal to be done by now. 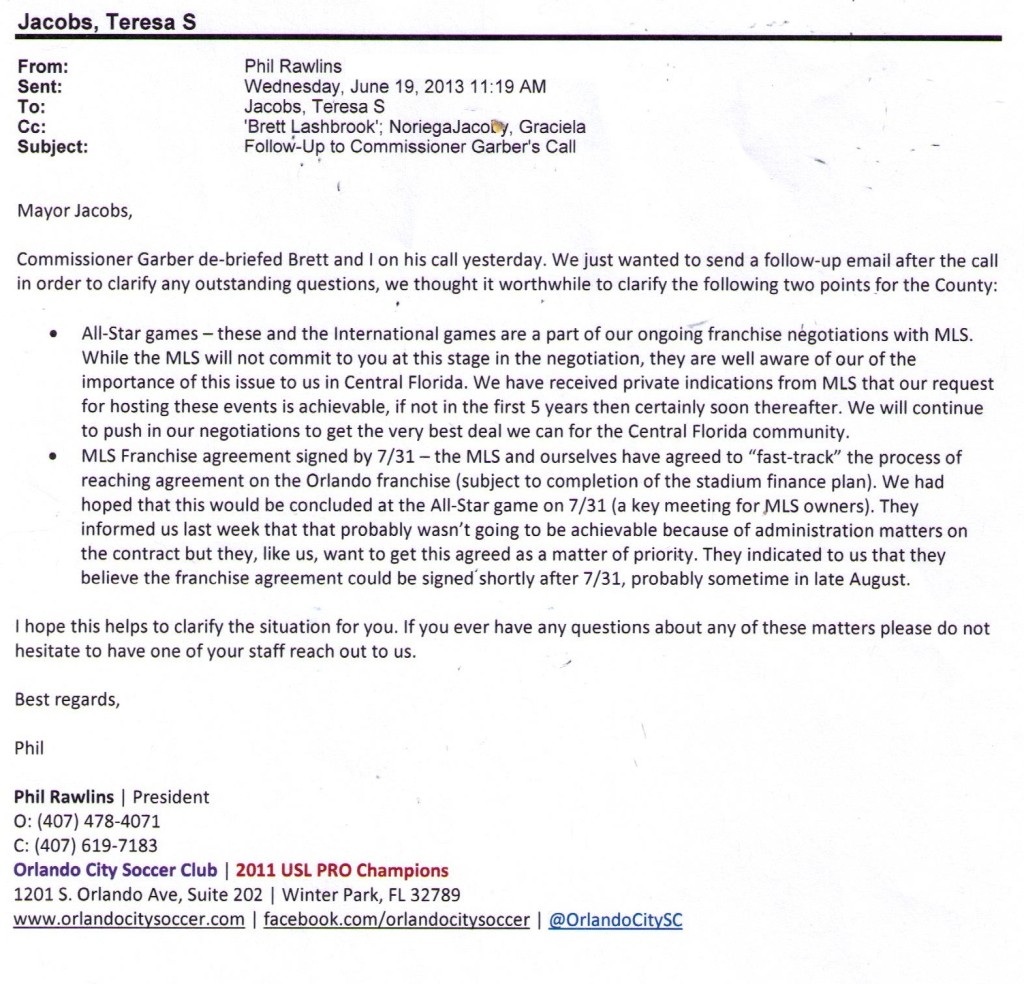 Email to Mayor Jacobs explaining no guarantees on “All-Star” games or International games within 5 years as has been claimed.

Also, there are 19 teams in the MLS, more than the 4 teams we are hearing about. The fact remains most in Major League Soccer are losing money. The reality is the league struggles. Even though team representatives tout viewership numbers of the World Cup, Major League Soccer is NOT World Cup soccer. The TV ratings for the 2012 MLS Cup Championship was lower than the third round of golf’s World Challenge on NBC (1.0) and lower than MLS Cup 2011, which got a 0.8 rating featuring the same two teams. World Series of Poker is more popular than Major League Soccer based on TV ratings.

Let’s also not forget Orange County Comptroller Haynie has repeatedly said there are “no excess reserves” despite what Mayor Jacobs continues to claim in public meetings. In fact, allocating more of these funds for a soccer stadium will jeopardize the Convention Center funding as it is taking from the pool the BCC already allocated to be spent on the Convention Center upgrades. Commissioners should continue to build the reserves as opposed to spending $20 million on a soccer stadium that will gentrify Parramore.

In addition to the financial concerns, the gentrification of Parramore should be a cost too high for Orange County to consider. The current proposals for over-development in Parramore will bring more damage and devastation to the County and City as well as this historic neighborhood. They love their community like anyone else and of course they want better for the families and their future. The continued displacement of residents leaves many of the pressing issues unresolved and only pushes the problems further into the County and unincorporated areas. Commissioner Pete Clarke mentioned gentrification and the looming displacement on national Fox News this week. This decision alone could lead to a negative backlash against Visit Orlando and Orange County tourism branding. Should this pass the County, a “Don’t Visit Orlando while they Gentrify Orlando” campaign will launch.

What protections or guarantees are being made in this deal for the people of Parramore? The city of Orlando has lied to Parramore for over a decade with broken promises on affordable housing, education, public safety, transportation and opportunity. Despite $600 million already invested downtown in sports venues, the majority of Parramore residents live below the poverty line.

Mayor Jacobs is failing our community on this issue. There are too many questions still left unanswered in this “fast-track” deal, as described by Mayor Jacobs’ own letter to the team owner. We call on the BCC to reject this fast-track and to reject passing any proposal to spend Orange County tourist tax dollars on a soccer-specific stadium in downtown Orlando.