You are here: Home › City of Orlando › Lawsuit Withdrawn As MLS Stadium Opponents Plan Next Moves 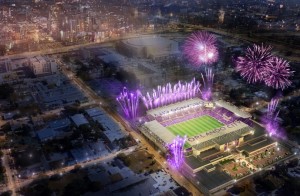 Supporters of the Orlando City soccer team’s downtown stadium can breathe a sigh of relief, as the lawsuit filed against the city’s sale of the land has been voluntarily dismissed by the plaintiff for the time being, with the option of refiling. The legal challenge centered on questions about eminent domain and the many changes to the stadium process over the last few years. But the voluntary motion to dismiss does not mean the stadium opponents are done with their fight.

“After collecting additional information and evidence, we have made more startling revelations,” said Lawanna Gelzer, one of the plaintiffs on the lawsuit against the city. “At this time, there are other avenues that must be pursued first an‎d we will be announcing our next steps in the coming days.”

Critics of the stadium plan continue to piece together the large, complicated and ever-changing process that led to what Mayor Buddy Dyer called “Plan M” to force the controversial Parramore location for the MLS stadium. After filing the lawsuit in response to the quick public announcement by the City Council about the sale of the necessary land, the plaintiffs’ research has uncovered new information and documents related to the process. Gelzer said after what has been uncovered, “of course it will have to be amended given the new information and now new questions also exist.”

In the City of Orlando’s response to the lawsuit complaint, issues were raised about legal standing as well as the addresses of properties in question. The possible issue with standing – specifically the city arguing the Gelzers do not having legal standing to bring this case to trial – could have led to an ultimate dismissal further down the court proceedings, said the city’s response. Attorneys for the city also argued plaintiffs had the incorrect addresses, which opens another door of questions about the stadium process and the city’s prior actions.

The new address for the soccer stadium is 655 West Church Street, but that change only happened after the eminent domain debacle by Dyer. This address change only muddies the entire ownership timeline. However, the city clearly owned the land for more than one year and substantially modified the land during its ownership and control, something city officials continue trying to hide. The city took ownership of the properties through the order of the court, demolished structures including a warehouse, substantially modified the land and conducted remediation in preparation for construction for more than a year. Those actions mean the Florida eminent domain statute must be enforced moving forward, according to supporters of the eminent domain law and opponents of the stadium process.

In January 2014, Circuit Judge Patricia Doherty ruled in favor of the City of Orlando in the first eminent domain case for land next to the church and the City was ordered to deposit more than $3 million as an estimate of the parcels’ value. With these properties, Dyer hastily made the decision to close Parramore Avenue and shift the stadium location to avoid an actual court case against Faith Deliverance Temple, which attorneys predicted would favor the church in the first real test of Florida’s new eminent domain laws. At the time of the eminent domain seizures, City of Orlando spokeswoman Cassandra Lafser told Law360 in an interview, “The public purpose was confirmed by the court, and the city was awarded the two properties located at 639 West Church St. and 607 West Church St.”

When city officials were forced to once again change plans, the Orlando City soccer team decided to privately finance the project and no longer have the MLS stadium be an Orlando public venue. City attorneys immediately began explaining they were “unwinding” the eminent domain ruling with another judge and more orchestrated back-room deals with the property owners. In this process, 639 West Church Street and surrounding property became 655 West Church Street. You can no longer pull up the 639 West Church Street address if you attempt to search on the Orange County Property Appraiser’s site. But, if you do search for 655 West Church Street, the OCPA’s file includes a picture of the property clearly labeled “639 W Church St.”

Part of this ongoing process will now turn to the state, where many legislators in Tallahassee have been following the story. The eminent domain law in question was also mentioned by two Republican candidates for President, Marco Rubio and Jeb Bush, who both touted the eminent domain law and gave descriptions that would seemingly confirm the Orlando case flies in the face of the spirit of the law, if not the letter of the law. Gelzer said the possible violation of state law could become part of a larger issue and investigation after more information is added to the case and provided to the appropriate officials.

“It’s shocking. The more we look, the more we find,” Gelzer added. “It’s the exploitation of a historic African-American neighborhood in the name of only a few. It’s corporate welfare, corruption and greed. I’m appalled this is what we are witnessing in 2016 in Orlando, Florida.”

Two weeks ago, Gelzer shifted her focus to another step in the process by appealing the Appearance Review Board’s approval of the revised MLS stadium design plans. There will now be an independent hearing regarding the matter, once again further delaying the process. The case has been assigned to Hearing Officer Susan Johnson-Velez, out of Tampa, though a date for the independent hearing has not been set at this time. Gelzer’s appeal and request for an independent hearing came after she expressed numerous concerns to the Appearance Review Board about the proposal and the impact to the surrounding neighborhood.

“Even though city officials know they are breaking the laws on the books, they don’t seem to care,” Gelzer said. “Their actions caused this and now they must be held accountable like everyone else.”

Opponents of the stadium process are also promising to file an ethics complaint against Orlando officials based on new evidence that has been collected about the stadium process. A press conference will be scheduled in the coming days to reveal more information, according to Gelzer.