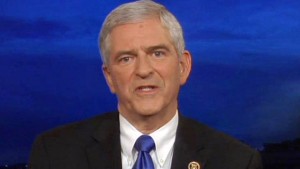 Today’s high-stakes Republican leadership meeting on Capitol Hill will include a vote for their party’s Speaker nominee, as John Boehner is resigning from Congress. Orlando Congressman Dan Webster is one of the three running for Speaker of the US House along with Reps. Kevin McCarthy and Jason Chaffetz.

With the latest controversies surrounding Rep. Kevin McCarthy’s comments on the Benghazi committee, Webster and Chaffetz may believe their odds are getting better ahead of a full vote on the floor of the House of Representatives. “My goal is for the House of Representatives to be based on principle, not on power,” Webster said in an email announcing his run for Speaker. “Every Member of Congress deserves a seat at the table to be involved in the process.”

But it’s important for American voters and members of Congress to remember how Dan Webster reacted to citizens asking him questions at town hall meetings. Webster’s alarming actions expose the reality behind his view on power and shows he clearly does not believe every citizen deserves to be involved in the process.

In 2011, Congressman Webster actually issued a “Citizen Watch List” including names, photos and vengeful comments about his own constituents. But Webster distributed his Citizen Watch List all over the country, discouraging participation by other citizens and encouraging divisiveness and political attacks on regular Americans. The only thing these citizens did to Webster? They showed up to his town hall meetings and asked him questions about pressing national issues.

I was one of the “Watch List 6” Dan Webster targeted. My name was discovered, along with several others from Webster’s Central Florida congressional district, on pamphlets being handed out at an Arkansas town hall meeting. The scandal also made national news at the time.

The Arkansas Times wrote an article about Webster’s Citizen Watch List under the headline, “One from the Rove playbook?”

“At a town hall meeting held in Little Rock last week, staffers of Rep. Tim Griffin handed out pamphlets of ‘homework’ that included a list of Florida activists who have been critical of Republican politicians,” the Arkansas Times reported. “The packet featured photographs and some suggested pointed (and often leading) questions to ask. For instance, one directed at Michael Cantone, political director for Organize Now, read ‘Are you a ‘Political Operative’ who has worked on the campaign staff of numerous liberal Democrat Party Candidates?'”

The Huffington Post included a response from me at the time in their coverage of Webster’s citizen watch list:

“Citizens everywhere should be concerned as to whether or not tax payer dollars and resources were used to profile fellow Americans in an attempt to silence their voices and what role Congressional offices or campaigns played in disseminating state-sponsored intimidation of private citizens,” said Mike Cantone, Political Director for Organize Now, who was also profiled in the watchlist.

My friend and former president of Organize Now Tamecka Pierce was also featured in Webster’s Watch List. “It seems clear that the presentation of these materials is intended to encourage harassment of these citizen activists and to intimidate other citizens from speaking out across America by attacking those who have already spoken out,” Pierce was quoted about the watch list in Alternet and other media outlets. “This behavior is unfitting for any member of Congress or their Congressional staff and represents a threat to the First Amendment rights of all citizens. This type of state sponsored intimidation, is a troubling, direct danger to our democratic process.”

Pierce told Rep. Webster at the town hall she worried about cuts to the Medically Needy program that helped pay for chemotherapy and other treatments for her lupus and kidney disease after she lost her job. That was enough to land her on Webster’s Citizen Watch List.

Orlando resident Ron Parsell was another one of the six targeted by Watch List Webster. “I think it’s pretty weird. Someone asks a legitimate question, and all of the sudden somebody’s got a dossier on you,” Ron Parsell, 66, told the Orlando Sentinel at the time. “It’s the type of thing they’d do in old Russia.”

Parsell, a Vietnam veteran and retired Teamster who represented Disney employees, told the Sentinel attended Webster’s town hall meeting after receiving an email invitation from the Congressman’s office. “I’d never been to one of his meetings before, and I haven’t been to one since,” Parsell said. “I’m just not an activist like that.”

“I think it will discourage people from speaking out,” Pierce told the Sentinel. “I don’t know what repercussions this will have in my personal life.”

At the time, Organize Now and other community organizations rallied against Webster’s actions. An online petition signed by nearly 1,500 constituents also called out Webster’s tactics and demanded the Congressman immediately stop distributing citizen watch lists against his own constituents. “Intimidating people for speaking at town halls is unconscionable in a public servant,” the petition said. “Rep. Webster must immediately apologize directly to the private citizens he targeted in these watch lists, and to his entire district, in order to mend the broken confidence of his constituents. He must commit to immediately stop creating and distributing “watch lists” and to recognize the rights of all his constituents–not just his supporters.”

“All I wanted to do … is give them [other lawmakers] an example of how you can set the tone for your town-hall meetings,” Webster claimed to the Orlando Sentinel. “If they [the six on the watch list] in any way feel injured in it, I would [apologize] for sure,” he added.

Ironically, the House “Freedom Caucus,” which represents around 40 conservative Tea Party members of Congress, has now endorsed Watch List Webster’s bid for Speaker. So much for freedom to ask a member of Congress any questions. While Webster will not have enough votes today, he could pose a potential problem to McCarthy and the Republican establishment when the full floor vote happens for Speaker of the House.

The actions of Dan “Watch List” Webster were un-American and unbecoming of a member of the United States Congress. Town Hall meetings are an important tool for constituents to communicate with their elected representatives. Citizen watch lists represent the complete opposite. We can’t accept Rep. Webster attempting to intimidate people for asking questions and demanding accountability from members of Congress.

Yes, Dan Webster wants to be Speaker. But he does not deserve to be Speaker and should not be elevated to the highest position in the House.

UPDATE: Rep. Kevin McCarthy has dropped out of the race for Speaker of the House. Dan “Watch List” Webster remains in the race with the Freedom Caucus behind him.