You are here: Home › City of Orlando › ‘Public Servant’ Versus ‘Career Politician’ in Orlando Commissioner Race

The race for Orlando City Commissioner in District 4 is heating up as voters begin to return absentee ballots ahead of the November 3rd election. Successful business owner, national speaker and veteran Aretha Olivarez has been running an aggressive campaign against longtime incumbent Commissioner Patty Sheehan. Randy Ross is also running in the District 4 race.

In her latest mailer to voters, Olivarez contrasted her career to Sheehan’s, calling the incumbent a “career politician” and highlighting Sheehan’s controversial vote to raise property taxes on Orlando residents by 17.7% last year. Olivarez also used the mailer to tell voters more about her own background and character, including personal endorsements from other veterans who served with Olivarez.

“Aretha combines humility with a heart for making things better for those that she represents,” said Hattie J. Fields-Everett, retired US Navy and battle buddy of Olivarez. “I cannot think of a better person to serve the City of Orlando as a Commissioner.”

“Aretha Olivarez is a woman of genuine character,” retired US Navy Chaplain LT Joseph Daniel Johnson is quoted on the mailer. “Her life as well as military experiences qualifies her to serve well in diverse capacities. This lady will always have my vote.”

Olivarez spotlights the choice for voters in the District 4 City Commissioner election: a public servant versus a career politician incumbent.

The campaign mailer calls out Sheehan’s 15 years in the same office and Sheehan’s controversial vote to raise property taxes. The mailer contends Sheehan is a “rubber stamp” who leaves the community without a true voice on the City Council to stand up for them.

Olivarez has spent her career serving our country and helping others. She joined the U.S. Navy as an Information Technician Specialist. Olivarez served 10 years active duty during Operation Desert Storm and then joined the Navy Reserve. After the 9/11 attacks, she received the Presidential Recall back to active duty service for two years in support of Operation Iraqi Freedom.

For over 15 years, Olivarez has run her own for-profit business called Multiplying Talents. The company prepares documents and paperwork for non-profit startups to file with the IRS. “I’m humbled to say we have never had anyone denied his or her non-profit 501c3 approval from the IRS,” Olivarez notes about her business track record. Her own 501c3 organization, called State of the Nonprofit Community, holds quarterly events to educate nonprofit decision makers on sustainability and she also serves on several non-profit boards. The 2015 State of the Nonprofit Community conference took place in Orlando on September 26th.

“I worked hard in the military serving my country, building my business, and serving local and national charities,” Olivarez states on the mailer. “As long as I can remember, I’ve been serving others. I would be honored to serve on the City Council for District 4.”

Here’s the latest mailer from the Aretha Olivarez campaign: 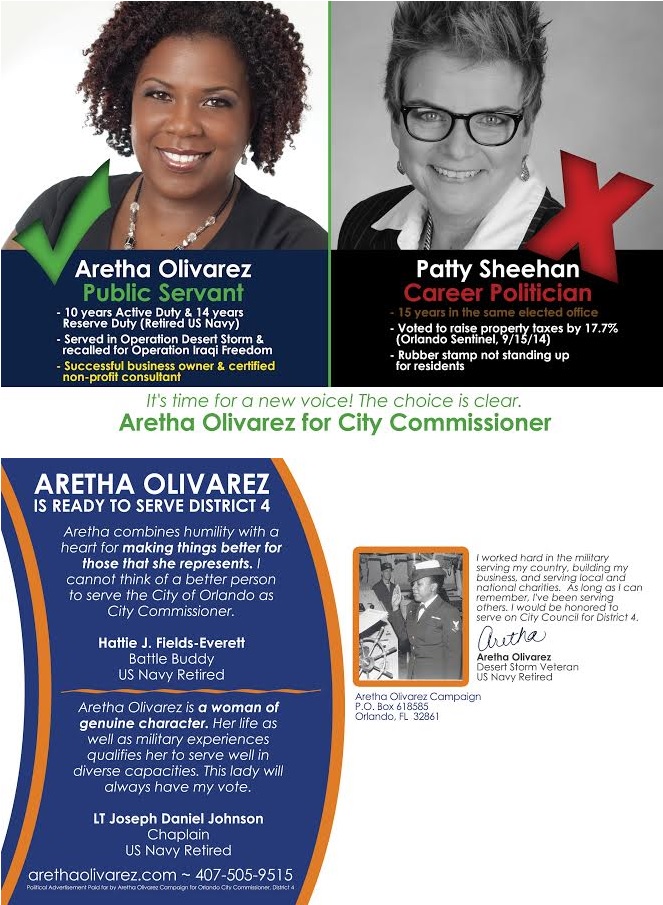