You are here: Home › City of Orlando › City Spends $6 Million to Save One Tree, Then Destroys Part of Wekiva River Basin 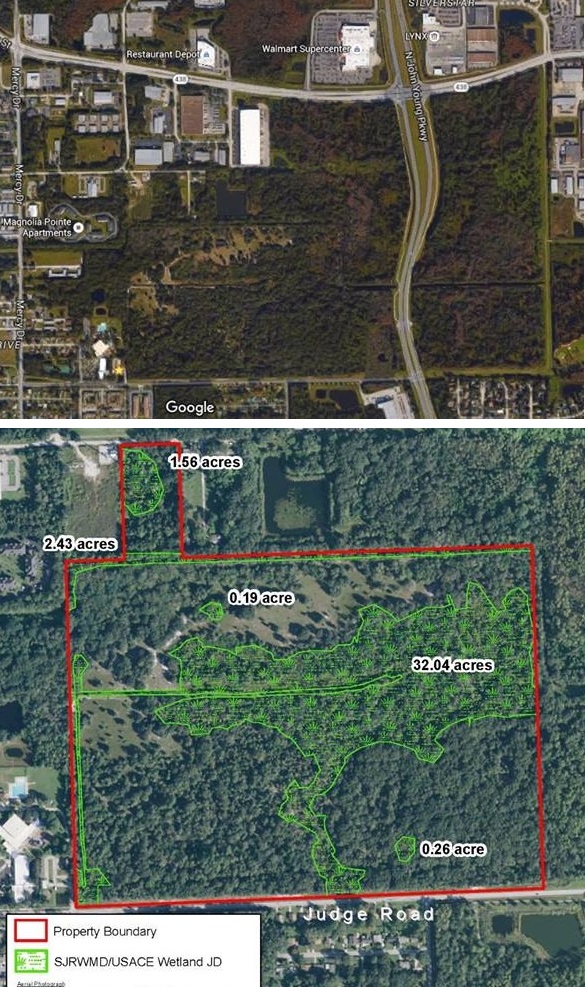 Wekiva Headwaters Park’s location in West Orlando: a view as it exists currently and what it will look like with 1 million sq ft of industrial warehouses after Orlando City Council approval.

One million square feet of wetlands and natural habitat are about to be destroyed in West Orlando, as City Commissioners remain silent due to pressure from Mayor Buddy Dyer. All of this destruction follows the City Council’s recent decision to spend $6 million to save Constitution Green park and preserve one massive live oak, at the urging of Commissioner Patty Sheehan, who was facing re-election at the time. Now Sheehan and the other Commissioners couldn’t care less about the destruction of thousands of oaks on the west side of town.

A plan pushed by City Hall insiders and influential developers calls for wiping out more than one hundred acres of pristine and virtually untouched wetlands in Orlando to build two industrial warehouses which will threaten several residential neighborhoods, several protected species and the Wekiva River Basin. It’s astonishing there has been no opposition from the City Council while public outrage increases and residents continue organizing.

Dr. Wanda Jones has been leading the way along with several other concerned residents and environmental groups attempting to stop the controversial planned development proposed by CNL and VHB, developers with very close ties to Mayor Buddy Dyer. The surrounding area is a predominately African-American neighborhood, raising additional community questions and concerns about the votes and intentions of the Mayor and City Council. The City Council previously tabled the hearing after the public outrage, realizing the city was once again not prepared for the community opposition. Today, the City will officially sign off on the development deal following the second and final hearing.

“Environmental injustice tends to happen quite frequently in African-American neighborhoods,” Dr. Jones told City Council members during a previous hearing. “This doesn’t seem to happen too much in Caucasian neighborhoods.”

“Building one million square feet of warehouse space on top of critically important wetlands demonstrates a clear lack of respect for both the surrounding neighborhoods and for nature herself,” said environmental champion Chuck O’Neal, who has been a leader of efforts to save local wildlife and has advocated for Florida’s natural resources for more than 15 years. O’Neal played a vital role in the passage of Amendment One, the Florida Land and Water Conservation Initiative, and helped organize Speak Up Wekiva. He still leads efforts to protect the Florida black bear as well. O’Neal is also running for Florida State Senate to continue his work in Tallahassee.

Since the proposal was first made public, many groups including the Sierra Club have joined Dr. Jones and residents. The well-connected developer wants to change the land use to “Industrial” in order to clear-cut the forest and build an industrial warehouse complex. The various groups have been urging members of the public to attend the City Council hearing and contact Commissioners, despite the uphill battle.

The proposed industrial warehouses will be located less than 500 feet from local neighborhoods and developers plan to use them as a drop-off destination for freight carried by semi-trucks. However, scientific studies conducted by the Center for Disease Control and OSHA show exhaust from diesel trucks and construction vehicles release chemicals and particles that can lead to cancer, heart disease, respiratory diseases, blood clots and gene mutations, among other illnesses. The area includes 146 acres of pristine and virtually untouched wetlands and other natural environment currently providing important habitat for several protected species including bald eagles, osprey, gopher tortoises, wood storks, eastern indigo snakes, and a bat species that is suspected to be the endangered bonneted bat.

“We don’t want this in our neighborhood,” Dr. Jones said of the industrial warehouse plan. “If it has to go somewhere, I would suggest maybe Windermere, maybe Isleworth, maybe Baldwin Park? But definitely not in our neighborhood.

“We are just as important as any of those neighborhoods are,” Dr. Jones declared.

Outside of City Hall, it’s hard to find anyone supportive of the planned approval vote by the Council. Commissioner Regina Hill attempted to meet with concerned residents, but the Mayor’s leash prevented her from doing more than simply telling Dr. Jones and others they were uninformed and there was nothing she could do to help.

“Why is it when a particularly bad thing is being done to the environment, or other area of public policy, the name of the proposal is the opposite of its reality?” asked former Orange County Democratic Party Chair and former County Watch Chair Doug Head. “The City Council of Orlando will have a last public hearing on Monday about the so-called ‘Princeton Oaks’ project paving a million square feet of wetlands to develop an industrial park on the West Side of Orlando. The point is that there will be NO OAKS left. Just concrete and warehouses.”

Of course, this industrial development deal was planned by City Hall insiders CNL Commercial Real Estate and VHB. Both companies have a lot of influence over Mayor Dyer and the current Council. CNL representatives share Dyer’s skybox suite and contribute thousands of dollars to Dyer’s re-election efforts, while VHB conducts city studies like the controversial Parramore plan justifying gentrification and displacement of residents for new developments and the struggling city-supported Creative Village project.

These wetlands are important because they absorb large amounts rainwater and prevent flooding. The wetlands on this property also filter pollutants out of the water so water flowing from that land into Lake Lawne is clean. The Wekiva River Basin is a large region of land in Seminole, Orange, and Volusia counties, and rainwater drains into lakes, streams and rivers that feed into the larger Wekiva River.

“Is one community worth more than another?” asked Lawanna Gelzer, President of the National Action Network Central Florida chapter. “Based on this Mayor and the actions of the City Council, the answer appears to be yes as they continue to ruin urban communities on the west side of town. This Council has been doing this for years, but they would not do this to any other area of our city.”

Dr. Jones previously brought signed letters from residents who could not attend the City Council meetings and had filed a quasi-judicial appeal of the Council’s original decision. She has outlined studies detailing the health impacts from industrial development and pollution, including diesel fumes caused by the trucks in addition to the reduction of trees. Other residents have also shown up and spoken out against the development proposal, but City Commissioners did not budge in their support of Mayor Dyer’s proposal. The City Council voted unanimously to approve it at Monday’s meeting.

“Please think about us!” another resident Amy Jones declared to the Mayor and City Commissioners.

“They’re changing the ordinances for industrial? That is ridiculous,” resident Marchelle Robinson said. “It is environmental injustice. They do not do this in certain areas. Why are they doing it in my home?”

The Orlando City Council did not hesitate to find millions of dollars to save one massive live oak tree near Lake Eola. But then they quickly turn around and vote to destroy one million square feet of wetlands and other natural habitat in the name of developer greed and influence. It makes no sense.

Residents simply want to protect their environment and protect their community. It’s a shame the Orlando City Council refuses to stand with them and do the same.