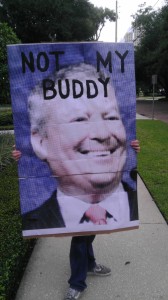 The City of Orlando’s financial pressures are finally forcing Mayor Dyer and the Council to admit the budget crisis is far worse than they have been saying. In fact, Mayor Dyer said in the state of the city address there is a “structural imbalance” in the budget that is unsustainable. Dyer and City Commissioners now admit they will likely need to raise taxes and fees.

It’s no surprise. I warned about the looming budget crisis back during my campaign in 2012 (although the Sentinel didn’t want to write about it then). Since then, research and records requests have revealed the financial situation in Orlando is even worse. A major part of the financial mess revolves around the fact that this city simply can’t afford Buddy Dyer’s major development schemes.

In addition to the hundreds of millions of dollars our community will spend over the next few decades on the Venues projects and bond payments, Dyer has been putting our city further into debt through secret loans he negotiated with the Sunshine State Government Financing Commission, with more than $115 million still outstanding. Making matters worse, Dyer took these loans with variable rate interest, meaning no one knows what this will really cost us.

Now that Dyer and the Council are admitting the City will need to raise taxes, it makes my original question about the constitutionality of the Venues Agreement and Dyer’s secret debt without a public referendum even more valid.

The city has faced budget shortfalls before, and they have cut services and raised fees to avoid increasing “taxes.” But now the hole in their financial scheme is too big to keep up the façade. Makes you wonder why Dyer and the City Council tried to rush through a 21% raise for themselves just a few months ago with this financial crisis looming, doesn’t it?

And it’s not just the Venues projects that have caused this. Dyer’s mismanagement spans to other areas of concern, including the police, fire and city employee pensions. SEIU labor union representatives have expressed concerns about the lies from City Hall and Mayor Dyer during their negotiations – even exposing the City’s previous $12 million budget deficit. Dyer and the Council said the city didn’t have enough money to offer public employees a raise like the elected officials gave themselves.

All this panic from City Council is coming now, but the pain will continue for decades to come. Those variable interest rate loans don’t come due until 2024 and will add tens of millions of dollars as additional burdens on the city budget. Our local leaders like spending other people’s money – for instance, Orlando will pay at least $1 million every month for the next 30 years to pay off the new Citrus Bowl debt alone. That means Orlando is locked in for 30 years to this debt at a rate of at least $360 million.

Buddy Dyer’s house of financial cards is feeling the pressure. This is just the beginning on the financial crisis in Orlando.