You are here: Home › City of Orlando › A Look at Homelessness in Orlando From Their Perspective: Faith Deliverance Temple 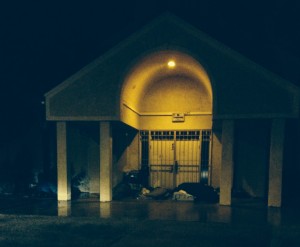 There is still a lot of public backlash over recent City of Orlando actions, including the eminent domain seizure of a local church in Parramore to build an MLS soccer stadium. In fact, the issue is really bothering many across the City Beautiful.

Earlier this week, Emmett O’Dell was feeling so bothered that he thought to himself what many have said, “what is legal isn’t always right.” He found himself down by Faith Deliverance Temple, yes the same Parramore church that Mayor Dyer is attempting to seize and demolish to make room for the new soccer stadium. But Emmett decided to have a conversation with one of the gentlemen and he recorded 4 powerful and eye-opening short videos, offering a look at homelessness in Orlando through their perspective. Emmett posted online with the videos:

I noticed that the portico was filled with homeless people trying to stay dry from the rain storm, I stopped and took several photos and then a gentleman, a homeless gentleman came over and started talking with me and I asked if he minded me recording him and asking him a few questions…

Be sure to watch the videos. Then think about what we can all do to make real progress in Orlando, you know, not just building huge half billion dollar venues while so many continue to suffer. Think about having more conversations with all our neighbors and community members, like Emmett did.

And remember to be an advocate for everyone in our City Beautiful.

One Response to "A Look at Homelessness in Orlando From Their Perspective: Faith Deliverance Temple"