You are here: Home › City of Orlando › What Was Orlando Commissioner Robert Stuart Talking About? 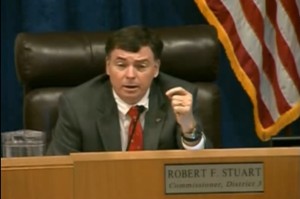 What Commissioner Robert Stuart said at City Council about his constituent communications does not add up to what the official records show.

Two weeks ago, Orlando City Commissioner Robert Stuart offered a few comments before the City Council voted on the controversial Tinker Field ordinance. At one point, Commissioner Stuart stated adamantly “the people I talk to in my district say ‘tear it down.'”

But that’s not exactly the truth, as the Commissioner’s own records and communication show. So what was Commissioner Stuart talking about? He’s not telling, but Stuart’s official records do provide some sunshine.

Commissioner Stuart returned 21 pages of email communications regarding Tinker Field – but only one encourages Stuart to tear down Tinker Field.

“There are alternatives to what the Mayor and Commissioner Stuart are planning, and it is time the community’s wishes and concerns were genuinely considered,” Dr. Mary Travis wrote Commissioner Stuart and other City Commissioners attempting to save Tinker Field. “The deliberately deceiving ordinance might make the public first think the City wants to save the historic site, but in reality it is nothing more than a cleverly worded way to destroy the historic site right after Black History Month ends. This is a bait and switch written to obfuscate and confuse the careless reader.” Dr. Travis is a City District 3 voter, as am I.

The Orange County Democrats also delivered a resolution calling on the Mayor and Commissioners to save and preserve historic Tinker Field and the grandstands. The Democratic Party represents voters across Commissioner Stuart’s district, including Stuart himself. Stuart included a copy of the resolution in his response to the records request as well.

But the one communication to Commissioner Stuart suggesting “it will be a great accomplishment to remove Tinker Field” seems to be the communication Stuart references at Council. And the email, sent from Judd Peterson, is quite interesting but perhaps not the most realistic when lined up with actual history. The email’s subject says “Tear it Down NOW!” and was sent to Commissioner Stuart, Mayor Dyer and Dyer’s chief of staff, Frank Billingsley.

Stuart said about the constituents urging him to tear down Tinker Field, “I think they are people who have been in town a little bit longer than me, over 60 years.” The email from Mr. Judd Peterson begins “I have live hear [sic] my entire 64 years.” Among other interesting comments in the email, he contends “there was 100 times more history in the part of the Tangerine/Citrus Bowl that was torn down than in all of Tinker Field. A lot of us spent many years using the locker rooms in the Tangerine/Citrus Bowl from Cherokee Jr. High School to Boone High School.”

Meanwhile, Tommie Hosier, a fifth generation resident of Orange County, wrote personally to Commissioner Stuart: “Hi Robert, I am writing to you to ask that you consider saving Tinker Field. I believe you have been active in Little League program in College Park. Wouldn’t Tinker Field be a wonderful Little League site for its surrounding community,” the email plainly stated. “The city could handle the needed repairs. This is saying nothing of the historic value of Tinker Field. But you know about that too.”

Denise Sprenkle wrote, “Hey Robert why not make the Tinker field a field of dreams for Little League. That way it still honors Martin Luther King and keeps the seats and makes the field the right size for the games.” She added, “It would be a way to keep it up and running. Let me know if you like my idea.”

Commissioner Stuart’s records were produced after responding to this public records request:

I would like to request all records, emails, text messages, minutes, meetings or any other communication to and/or from Commissioner Robert Stuart related to Tinker Field from constituents of his District or other local residents. This is to follow up on statements made by the Commissioner at Council yesterday, where he stated on the record about resident desires to “tear it [Tinker Field] down.”

Granted, elected officials will hear from constituents on issues just about anywhere. But that’s why most of the time, especially if it is on a controversial issue to be voted on, elected officials will ask their constituents to email or call their office with the feedback as well. It’s not that they are not listening, elected officials need to have an official record. In fact, even newly elected Commissioner Regina Hill understands the importance of that, as she recently asked a Downtown Development Board member to email her office a suggestion after it was offered directly to her during an official meeting (listen here). Why else would a Commissioner need someone to email her after he told her face-to-face?

For Commissioner Stuart to make an overarching statement that does not line up with the official record before a controversial vote is irresponsible. Commissioner Stuart also should have provided more details about the names of people he spoke with and comments he received about Tinker Field if he was going to make such statements ahead of a key vote. This information at the very least should have been included in the records request if such meetings or comments existed.

Even if Commissioner Stuart did talk to others, to say the only thing he was hearing was to “tear it down” is disingenuous, plain and simple.

Commissioner Stuart also did produce more details in another records request. After being asked about another statement made at Council regarding the Tinker Field seats being donated to another entity for use after demolition (yes, apparently the seats will be good enough to donate but Orlando doesn’t seem to have interest in keeping the historic items). In that records request, the City Clerk reported back:

Per Commissioner Stuart, he was  referring to a phone conversation he had with a representative of the Leesburg Collegiate Baseball team about the potential of re-use/donation of the original Washington Senators seats.

At the same meeting, Commissioner Stuart also asked Orlando Venues staffer Allen Johnson if cuff links would be made from the salvaged Tinker Field demolition, inflaming Tinker Field supporters hoping to stop the demolition. It’s the same city commissioner who said the Mayor should be paid $500,000 a year, right before the City Council raised taxes on local residents by 17%. He also pushed through the very controversial Princeton development for College Park, defying his own constituents.

“It is meant to quiet opposition with false promises,” Dr. Travis added in her email about the Tinker Field ordinance. “We have seen this recently in the fight for College Park’s island gateway, and this is the same game with the same major players on the council.”

It’s hard to understand who Commissioner Stuart feels accountable to, other than to powerful business interests and Mayor Buddy Dyer himself.