You are here: Home › City of Orlando › Must See: “Theresa is a Mother” Hits Orlando Film Festival 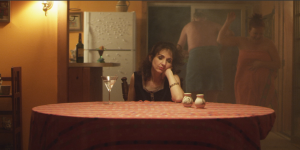 Life can take you off track and these days it’s hard to find anyone who can’t relate to that. Whether it’s struggling to find a job, not being able to pay the rent or attempting to raise a family, people are facing difficult transitions. But as everyone attempts to navigate the changing times, “Theresa is a Mother” shows that heart will always set you right.

From the moment the film starts to the very end, viewers will become immersed in the film, feeling part of the family and part of this story. Theresa McDermott (C. Fraser Press) is a single mother in New York City who is down on her luck and down on life. Facing the hard times, Theresa takes a journey that tackles old wounds, unattainable dreams, and some other “exposures” as her family tries to become whole.

This is the first feature film for co-directors Darren and C. Fraser Press and they truly make it a family affair with the casting of their equally talented daughters, Schuyler Iona, Maeve, and Amaya.  They also produced the feature along with Associate Producer Christina Powers and all were in Orlando for the screening. C. Fraser Press steals the show with a compelling performance and is nominated for Best Actress in the Orlando Film Festival. Press recently won Best Actress at the Reel Independent Film Festival in Washington D.C. where the movie won Best Feature Film. Both are deserving of encore wins.

Between the genuine script and the excellent acting, this movie will leave you laughing throughout while pulling your heartstrings making it hard to fight back the tears. Every scene in this film showed the Press family as masters of storytelling, but what really makes this film enjoyable are the heartwarming emotions, genuine dialogue, and convincing characterization by every actor.

The multi-talented Schuyler Iona Press wrote and performed the feature’s score. All three Press daughters will have bright futures. Matthew Gumley adds a surprisingly funny and enjoyable character to the mix, while Richard Poe and Edie McClurg lend key supporting roles to complete the story.

“Theresa is a Mother” blends a beautiful narrative that comes full circle. A story with many levels and many life lessons, this is a movie that makes you feel good about life when you walk out of the theater.

It’s rare to find a story told like this today. At the end of the screening, C. Fraser Press told the audience this was “a project that really became a joy from beginning to end.” Indeed it is a joy. “Theresa is a Mother” proves to be a captivating feature film that will resonate with diverse audiences. A remarkable independent feature film worth watching – don’t miss it.

For more information on this film, visit here.

UPDATE: Theresa is a Mother now streaming on Netflix!