You are here: Home › City of Orlando › Sentinel Report Further Exposes Use of Excessive Force by Orlando Police 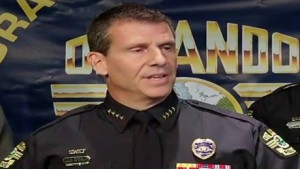 Orlando Police Chief John Mina continues to be under pressure regarding the use of excessive force and faces questions about his leadership of OPD.

The Orlando Sentinel has published a major report, Focus on Force, revealing 3,100 people were “hit, kicked, pepper-sprayed, shocked or had some other force used on them by Orlando Police Department officers from 2010 through the end of 2014.” OPD officers injured 1,900 people during that time, and 1,200 required medical care, according to the Sentinel analysis. The excessive force cases have already cost Orlando taxpayers millions of dollars, with many more cases still to come. Reporter Rene Stutzman’s work on the issue is an example of excellent journalism.

The use of force by Orlando police is more than double the rate of some other agencies, including Tampa, according to the Sentinel. “On average, Orlando officers used force 640 times a year. That does not include 30 shootings, 10 of them fatal,” the Sentinel reported.

The report also reviews some of the recent excessive force cases, many of which were spotlighted in the Orlando Unfiltered Police Brutality & Excessive Force Recap video.

“This behavior is unacceptable,” said Lawanna Gelzer, President of the National Action Network Central Florida chapter. “The data and information is now before the community and we need a full investigation by the Department of Justice. You don’t have to go to Ferguson to understand this problem, it is happening here in Orlando.”

Two experts on police use of force seemed to agree after reviewing the data, with one telling the Sentinel the Orlando Police Department “certainly needs to be looked at.”

Mayor Buddy Dyer, who was recently re-elected with the full support of OPD, also defended OPD officers’ use of excessive force. But Mayor Dyer did admit his policies, including those creating the current downtown culture, have made the job for police officers more dangerous – and he admitted he would never want to do it himself.

“They have a very dangerous job to do, a job that I would not want to do. I quite honestly would not want to be one of the officers on Saturday night or Sunday night, dealing with all of the people that they do downtown,” Dyer told the Sentinel.

“We can no longer tolerate the excuses from Police Chief Mina,” Gelzer, who has called for Chief Mina to resign, said. “The silence from the City Council on this issue is also alarming. Where is the leadership?”

Amazingly, five percent of Orlando cops accounted for 25% of the instances reviewed by the Sentinel where force was used. Downtown accounted for about one-third of all use-of-force incidents. Click here to read the Orlando Sentinel’s full report titled Focus on Force.