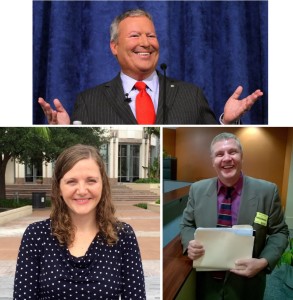 Orlando Mayor Buddy Dyer has drawn a second challenger in this year’s snap municipal election to be held November 3, 2015. Linda “Sunshine” Grund becomes the second registered Republican to enter the race against Dyer, a Democrat.

Sunshine Grund flirted with running for Orlando Mayor in 2011, even releasing a YouTube video stating her same platform for this campaign: “promise, peace and purpose.” She never qualified for the 2012 election, but she is back this year and officially on the ballot as “Sunshine” Linda-Marie Grund.

Grund now lives with her family in the Lake Nona area and she has stated her campaign will be centered around development in the Lake Nona area, according to reports. It is unknown whether that will have appeal to voters across the City of Orlando and Lake Nona is not known as a very active voting base. There will be no City Commissioner race for the Lake Nona area either, likely reducing chances for higher turnout in that area of the city. Grund also stated she does not plan to seek campaign contributions.

Paul Paulson, another Republican, also entered the Mayor’s race this week. Paulson likely intends to self-fund his campaign to the tune of hundreds of thousands of dollars to match Buddy Dyer’s campaign war chest. However, it is unknown if Grund’s entrance to the race as a second Republican will impact Paulson’s plans to secure enough votes to oust the Democratic incumbent.

Grund will have less than one month to get her message out and explain what “promise, peace and purpose” means before absentee ballots will be mailed to Orlando voters.

That leaves little time for her or Paulson to introduce themselves to voters and explain their plans for managing the city, its ongoing budget problems and major development plans. The campaign is on.