You are here: Home › City of Orlando › Buddy Dyer Draws Republican Challenger: Is A Bigger Scheme At Play? [Updated]

Republican Paul Paulson has qualified to run for Orlando Mayor against incumbent Buddy Dyer and is reportedly ready to self-fund his campaign to the tune of hundreds of thousands of dollars. Paulson will need every dollar, as Dyer has pulled in nearly $300,000 in contributions for his re-election as of July 31st.

Paulson is already making his argument, posting on his Facebook page before qualifying saying, “we will have an alternative to 17.7% tax increases.” Last year, Dyer and the City Council members did vote to raise property taxes by 17.7% to cover huge budget deficits and ease the large debt piled on by Dyer’s development plans like the Orlando Venues.

Neil G. “Paul” Paulson listed Help the Vets as his primary source of income on filing documents. According to Help the Vets, Paulson is a disabled veteran who served in the US Army for 10 years and he is now a National Director for the organization. He is also a retired trial lawyer.

But just as Paulson qualifies to run for office, he is also being connected to controversial but effective Republican consultant and founder of Ax the Tax, Doug Guetzloe. Guetzloe served a federal sentence for income tax crimes 2012.

I have received information indicating Guetzloe has already been making calls into the minority community searching for another candidate to jump in the race and complicate the equation for Dyer’s re-election. Apparently, Paulson some supporters believe if a minority candidate joins the race, that candidate could pull votes away from Buddy Dyer in the African-American community, one of the Democratic Party’s base of votes and a community where Dyer relies heavily on collecting absentee ballots. 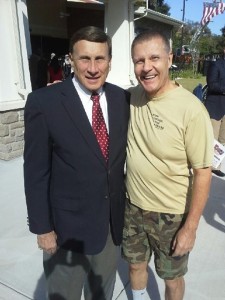 But the Republican’s entry into the Mayor’s race will likely unite Democrats behind Dyer, despite a split caused by conflicts with some Dyer policies and actions over recent years. Orlando is a Democratic city and even though Dyer has not been the best Democrat (as even I have noted in my vocal criticism of many Dyer policies and actions), most Democratic voters likely will not want to trade that in for a Republican with unknown motives. The Florida Democratic Party spent big money and sent lots of mailings to back Dyer in previous elections and the party establishment will be there for Dyer again. Dyer, who I nicknamed a “Chambercrat” in 2012, also has the support of the Orlando Chamber of Commerce, who already has billboards up supporting Dyer’s re-election. The Chamber of Commerce typically supports Republicans and this means Paulson will not be able to rely on that community for help. It is also well-known around town that the local Orange County Republican Party Chair Lew Oliver has been vocal in stating his party is not interested in targeting Dyer. Previous runs by Republican Ken Mulvaney prove the lack of Republican Party support in Orlando municipal elections.

So is a bigger scheme at play? Will Paulson self-fund his campaign and put in hundreds of thousands of dollars to take on Dyer? Is he counting on a third candidate to join the race?

It will be interesting to see if any additional candidates choose to jump into the Orlando municipal elections before qualifying for Orlando’s City Council races ends Friday at noon. Either way, Buddy Dyer now has a challenger and the snap municipal election just got messy.

The scheme fell through as qualifying ended with candidate Cynthia Harris attempting to qualify for the Mayor’s race at the last minute. Republican consultant Doug Guetzloe posted on Facebook on September 4th:

Interesting that today a black democratic woman tries to file for Mayor against Emperor Buddy; files her paperwork, gets the city clerk to review each and every page of the filings, gets the clerk to certify everything as correct, gets the city clerk to clock it all in and gives her a receipt saying everything is good, hours before the deadline then hours after the deadline calls up the candidates and tells her that he didn’t qualify because her treasurer forgot to sign one form, a form that the clerk hours before the deadline all was good. The clerk is appointed by the Mayor. Coincidental I’m sure.

According to City Clerk Celeste Brown, Cynthia Harris did not properly complete necessary paperwork and it appears there are questions about her campaign account and the check that was dropped off to City Hall. The City Clerk encouraged Harris not to wait until the last minute if she decides to seek public office in the future. Harris did not qualify.

A second Republican, Sunshine Linda Grund, did qualify for the Mayor’s race against Buddy Dyer.