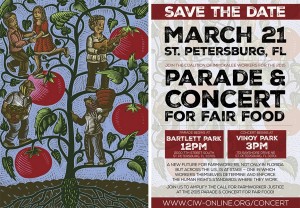 On Saturday, the Coalition of Immokalee Workers (CIW) will gather with supporters at Vinoy Park in St. Petersburg to celebrate the Parade and Concert for Fair Food that hopes to inspire big changes in the struggle for Florida farmworker rights.

The Immokalee workers are planning for “one inspiring, colorful day to harness the power of music and visual art to celebrate the groundbreaking changes underway in Florida’s fields and to amplify the rising call for Publix and Wendy’s to recognize their responsibility to the women and men who harvest their produce.” The coalition has already lined up major victories after years of organizing, and workers hope to both celebrate those changes and inspire more big change for workers.

The Campaign for Fair Food has brought twelve major, multi-billion dollar corporations into binding agreements with the CIW. The unwavering Campaign for Fair Food has already helped tens of thousands of tomato pickers in Florida, securing rights to shade and water in the fields; to report abuse without fear of retaliation; to form participatory health and safety committees; to be paid for all hours worked; and to work free of sexual harassment and forced labor.

“Until all farmworkers can count on a workplace rooted in dignity, respect, fair wages and human rights, we will be here,” the CIW proudly proclaims. “Join us.”

The event will kick off with a huge parade at 12pm, leaving from Bartlett Park. The streets of St. Petersburg will fill with the art and creative spirit of the CIW’s Campaign for Fair Food. After a 3-mile parade, marchers will convene at Vinoy Park for the Concert for Fair Food, featuring Grammy award-winning Ozomatli, La Santa Cecilia in addition to Ruby Velle and the Soulphonics. According to organizers, both the parade and concert will be framed with large-scale murals and other artwork, created collaboratively by visiting artists and farmworker members in the weeks leading up to the event to capture the hope and dignity at the heart of the Fair Food movement.

If this event is anything like the Immokalee Inspiration I attended in March 2012, it is going to be an amazing day.

There will also be free bus transportation from Orlando to the event, leaving at 9:30am. Transportation will leave from the First Unitarian Church of Orlando (1901 E Robinson St, Orlando 32803). Anyone interested in hopping on the bus can RSVP at: bit.ly/Orlando_Bus

Here are the details for the Parade and Concert for Fair Food: 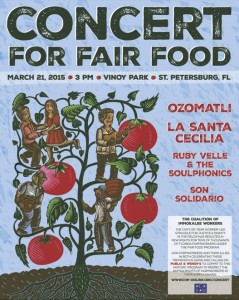