You are here: Home › City of Orlando › Orlando Commissioner Daisy Lynum Broke the Law in 2012 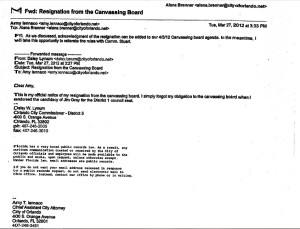 Commissioner Daisy Lynum’s resignation letter from the Canvassing Board, dated March 27, 2012. Lynum broke the law and was forced to resign.

City Commissioner Daisy Lynum broke the law in 2012 and was forced to resign her position on the canvassing board during the last round of municipal elections because of her actions.

After 16 years on the City Council, voters should expect more from their elected representative. Especially since Lynum claims her knowledge and years of experience should earn her another term.

While many in Orlando may not be aware of Lynum’s recent violation of the law, she could have been recalled from office for the offense. Instead, she is up for re-election this April 8 against two challengers: Cynthia Harris and Regina Hill.

During the 2012 Orlando elections, Commissioner Daisy Lynum resigned because she had endorsed Jim Gray, a candidate for District 1 at the time. The law states that a person cannot actively campaign for a candidate and be a member of a Canvassing Board. City Clerk Alana Brenner’s office caught the violation right before Election Day.

But before her resignation, Lynum was able to push through major changes to the absentee ballot process in city elections — policies that will likely remain in place for her own election. Lynum has already hired the infamous Ezzie Thomas to run her absentee ballot collection program in 2014.