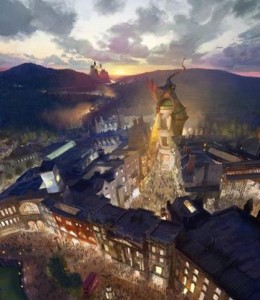 Walking through the Universal Orlando Resort, it is clear times are good. The Wizarding World of Harry Potter has transformed Universal Orlando and brought the Islands of Adventure park back to life. And the fun is just getting started.

The construction is moving quickly and now the theme park has made the expansion of the Harry Potter theme public: Diagon Alley.

This new Potter-land will be in the Universal Studios park and will connect to the Wizarding World of Harry Potter by a Hogwarts Express train ride that is sure to become a staple of the two parks. Buzz started for this expansion back at the end of 2012 and it will likely feature a Gringotts Wizarding Bank ride attraction that will anchor the land.

From the Universal announcement:

Scheduled to open in 2014, the world’s first centrally themed, multi-park experience expands The Wizarding World of Harry Potter across both Universal Orlando theme parks and allows Universal’s creative team to bring an unparalleled vision to this unique project. The new area will bring to life some of the experiences and places found in and around London in the Harry Potter books and films, offering brand-new adventures for fans and theme park guests from around the world.

The big year for Universal Orlando continues as Transformers: The Ride 3D and the new expansion of a Simpsons land are set to open this summer, 2013.