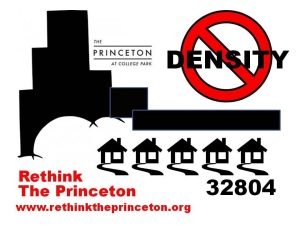 College Park residents are not backing down after Orlando Mayor Buddy Dyer, Commissioner Robert Stuart and the City Council defied their wishes and approved a massive new luxury apartment development. Residents are not just upset by the decision, they are continuing to organize their community.

Rethink the Princeton is leading the charge and the group is planning to appeal City Hall’s decision in court. The group released an update to supporters stating they have hired an attorney to work on the legal appeal. There are still many questions surrounding the controversial development project, including whether or not the project as currently proposed satisfies the requirements in the City’s own Edgewater Drive Special Plan for the area.

One major point of contention, the vision plan states clearly that a project of this size in this location must be a multi-use development, yet the out-of-town developer is attempting to claim the existing commercial block next to it, which remains under separate ownership, in order to meet the multi-use requirements. The Princeton development is nothing more than an expensive apartment complex as planned.

“Rethink the Princeton insists that the existing retail block on Edgewater Drive, under separate ownership, should NOT be included when calculating the maximum allowed density for the Princeton apartment complex,” the residents’ group stated. “Also, new commercial, office and public-benefit uses must be added to the project itself if it is to be considered a mixed-use development that would be in strict compliance with the Vision Plan and the special overlay district.”

Other concerns raised include the problems with building density on this scale. Residents have also pointed out the development will add more children to an already overcrowded school system. Will more portable classrooms find their way to Princeton Elementary or Lee Middle? Others have mentioned the many retail vacancies that have plagued Edgewater Drive, including ones part of the Wellesley development project. And of course, there are concerns about the high rents and costs.

The group has been building its appeal case since the controversial vote and say they are now ready to move forward in the process legally. Funding will play an important part of taking on City Hall.

“If we were wondering when to donate, the time is NOW,” the group added in its update to supporters.

Rethink the Princeton is hoping to raise $30,000 money as soon as possible for the legal appeal, the majority of funds being used for filing fees and future legal costs as the battle continues.