You are here: Home › City of Orlando › Bear Memorial Led by Five-Year-Old Animal Hero To Be Held November 1st 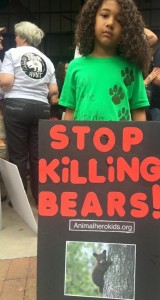 Animal Hero Kid Khendall wants to end the Florida Bear Hunt. He will open a bear memorial on Nov. 1st in Orlando at Lake Eola.

A memorial for slain black bears will be held in Orlando on Sunday, November 1st at Lake Eola. The bear memorial is being sponsored by the Stop the Bear Hunt Coalition and will be led by a five-year-old animal hero named Khendall, pictured to the right.

“I began getting emails, calls from parents and kind kids around the globe asking what they can do to help the bears,” said Susan Hargreaves, founder of Animal Hero Kids, a charity encouraging and recognizing kind kids. “It became evident that a memorial for the slain bears was called for, as well as the need to use the images from the often traumatized monitors.”

Khendall, nicknamed Lil Bear since he was 3, is an Animal Hero Kids Co-President and stated in a YouTube video, “rest in peace black bears, we love you.” Khendall’s video also calls for supporters to upload photos of one of the bears killed in the controversial bear hunt to Instagram using #StopTheFloridaBearHunt. He will open the memorial at 1pm at Lake Eola.

“This will be a day of remembrance for all of the bears that perished during the hunt last weekend,” said Adam Sugalski, the campaign director of Stop the Bear Hunt. “Black bear defenders from all over the state will gather together as one voice for our bears and vow to never let this happen again.”

Sugalski formed a coalition of groups united to focus on the injustice against the bears including Animal Action Network, Animal Hero Kids, Animal Rights Foundation of Florida, Girls Gone Green, and Speak Up Wekiva.

“The eyes of the world are now focused on Florida,” said Chuck O’Neil of Speak Up Wekiva, the group who led the legal charge against the hunt. “Even though the overwhelming majority of Floridians opposed this hunt, public officials proceeded with it anyway.  Our democracy is broken.  If any good can come out of this tragedy, it will be that Bloody Saturday, the first day of the hunt, is a wake-up call to every voter in every precinct across this state.”

According to a press release for Sunday’s event: “Millions of people around the world were shocked at the images of dead bears being relayed by animal advocates who were staffing the Florida Fish & Wildlife Commission Hunter Check Stations last weekend. The photos of dead bears, some still lactating, infants, and even a blind old bear who was nicknamed grandfather bear, poignantly told the true story of the mass killing.”

The memorial for slain black bears will be begin around 1pm at Lake Eola (195 N Rosalind Avenue 32801). According to organizers, the event is about coming together and paying respect to Florida’s beautiful black bears.