You are here: Home › City of Orlando › Another Stumbling Block for Dyer’s Plan to Move Union Rescue Mission 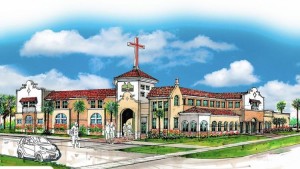 There was more public outcry at the Orlando Municipal Planning Board meeting today from Parramore residents and business owners. The target: the Orlando Rescue Mission relocation plan being pushed by Mayor Buddy Dyer.

A very large crowd, about 20 people, spoke out against the proposed relocation of the homeless shelter into the Parramore neighborhood. Earlier, officials pulled the OURM request to rezone and allow construction of a 28,500 square foot OURM Social Services facility with on-site temporary housing for the homeless. However, the public stayed to speak out against a necessary change to city policy to even allow the proposed relocation to happen.

The Future Land Use Element of the City’s Growth Management Plan states in Policy S.6.9:

The City of Orlando has determined that the over-concentration of social service uses in the Parramore Heritage Renovation Area has had a negative impact on the area’s stability and prosperity. Likewise, the City has determined that the establishment of adult entertainment facilities would further limit the revitalization of the area. In order to protect existing residential areas, encourage reinvestment and promote the fair distribution of social service uses throughout the region, the City’s Land Development Code shall include provisions to appropriately limit or prohibit the establishment, expansion, and relocation of such uses within Subarea 6.

The Municipal Planning Board was considering changes to city policy to allow the new shelter to be built at Anderson Street and Terry Avenue. But Parramore residents and business owners are tired of being the dumping ground for social services and they made their voices heard at the September 15th meeting. Because of the major public opposition at the meeting, the Municipal Planning Board voted to defer any decision until November.

“Today, the people were here to send a message and it is a clear indication that the community is fighting back,” said Lawanna Gelzer, candidate for Orlando City Council in District 6 and longtime community advocate. “The City Council cannot continue to take advantage of Parramore residents. The community is informed and ready to hold our City Council accountable if they try to push this change through. The people need a voice on the City Council.”

“It seems like we are the ones that you’re dumping on,” Cheryl Smith, a Parramore homeowner, told the planning board. “I am just tired of this.”

The relocation of the OURM facility is only necessary because the Union Rescue Mission sold its land in downtown to the Orlando Magic. That deal is paving the way for a new entertainment complex – and the Magic did not want any homeless in the area to scare away business.

“This ordinance was created and passed for a reason,” Gelzer added. “The community fought hard to make this a reality and we will make sure it is upheld.”

The original plan by OURM and Mayor Dyer was to move the shelter to Old Winter Garden Road. But residents fought back at the Orange County Board of Zoning Adjustment and prevented the move from happening. Orange County Mayor Teresa Jacobs and other Orange County Commissioners did not want to go against the will of the public with such vocal opposition and their own zoning board’s disapproval. The plan was pulled at the county level.

After the planned relocation failed with Orange County, OURM and Mayor Dyer decided to try to move the homeless shelter into Parramore, where he always tries to do whatever he wants despite the impact on the surrounding community. The proposed Parramore location would be just a block away from homes and a public park is just down the street.

The City of Orlando’s own policy states the over-concentration of social services in Parramore “has had a negative impact on the area’s stability and prosperity.”

It’s insane to think Mayor Dyer and the City Council would want to approve any change to this policy given the Parramore neighborhood already continues to struggle. And that’s exactly what Parramore residents and business owners told the Municipal Planning Board. Some pointed out how the action proved the City was really for revitalizing the area, but instead was only exploiting Parramore.

There’s also the possibility Mayor Dyer will attempt to annex the land that Orange County rejected as the relocation site on Old Winter Garden Road. That ploy by Dyer would keep residents out of the homeless shelter fight, but it would not go over without significant opposition in the community.

The Orlando Municipal Planning Board deferred the homeless shelter items to the November 17th meeting. Expect a crowd if the items do go forward.