You are here: Home › City of Orlando › 5,000 Absentee Ballots Returned in Orlando Elections So Far 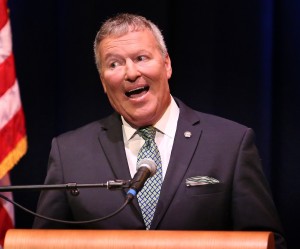 With just two weeks until Election Day, the breakdown of voters returning absentee ballots in the Orlando municipal elections could provide insight into where the race currently stands. So far, it also appears Orlando will continue being plagued by low turnout and low voter participation, with only 5,100 ballots returned after more than 15,000 absentee ballots were mailed to voters three weeks ago. There are more than 152,500 registered voters in the City of Orlando as of book closing for this year’s municipal election, according to the Orange County Supervisor of Elections office, which is 20,000 more voters than the last municipal election.

But in a “non-partisan” race that has become very partisan because of both incumbent Mayor Buddy Dyer and his challenger Paul Paulson, things could be getting very interesting with the current low turnout. Dyer is a registered Democrat and Paulson is a Republican – and both have been campaigning using the party labels.

If voters are lining up their support based on party registration, the Orlando election is currently split. Only 2,400 absentee ballots from Democratic voters have been returned, while more than 2,000 absentee ballots from Republican voters have also been returned to date. The City of Orlando is overwhelmingly Democratic, with more than 71,000 registered Democratic voters and only around 35,000 Republican voters in the city limits. There are also 45,000 voters registered as “no party affiliation” (NPA) and other smaller parties. However, it is clear in the “non-partisan” municipal election, NPA voters are once again sitting it out. Only about 700 NPA or third-party voters have returned ballots.

Despite the party registration counts, it could still be a blowout. It is not a sure thing to assume Dyer has no Republican support. In fact, his administration is dependent on corporate handouts and close ties to Republican officials and interests. This is why the Republican Party has never supported a challenge to Dyer and why the Chamber of Commerce is one of Dyer’s top supporters.

In fact, Dyer told the Orlando Weekly in June, “I get more crap from the left wing of the Democratic Party than I do from Republicans or the mainstream.”

With the current turnout and the fact Paul Paulson donated $600,000 to his own campaign, Dyer may be rethinking his statement on Democrats. But there are other concerns for Dyer in addition to the large campaign war chest of his opponent. There could be many reasons behind the lack of excitement surrounding this year’s mayoral election.

Dyer’s long record in the Mayor’s office has definitely annoyed and alienated supporters from both parties. Let’s not forget the fact that Dyer raised property taxes by 17.7% last year and has a decade-long record of spending and debt behind him. That’s not likely going to bring out Republican support for Dyer, but it may be encouraging Republican turnout for Paulson.

Dyer’s rude and arrogant attitude also presents problems for many residents and Democratic voters. Dyer rarely shows any respect to those who speak before the City Council and he attempts to ignore public concerns or any opposing viewpoints. Dyer is the reason why feeding the homeless and needy in Orlando is still illegal, despite his constant “Rethink homelessness” pleas. Maybe Dyer should start by showing some compassion.

This year, many African-American Democratic voters are also voicing their dissatisfaction with the incumbent mayor. Dyer has made the gentrification of historic Parramore one of his top priorities, breaking numerous community promises made to Parramore residents over the years. Dyer also refuses to acknowledge the unacceptable number of excessive force and police brutality cases happening in Orlando. Dyer also turned his back on Puerto Ricans and Latinos when he refused to meet with community members regarding a marker for community activist and war veteran Rico Piccard on Semoran Boulevard. Not to mention, Orlando still ranks as the lowest paying metro area in the country under the Dyer administration.

“I recall enormous enthusiasm at the beginning of the Dyer administration along with high expectations and many voters participating in making that decision,” said local Democratic leader Doug Head. “Voter apathy is at an all-time high in Orlando, signaling a major decline since Dyer was first elected.”

Those high expectations and broken promises may be causing problems as Dyer remains in office so long and continuously acts against his fellow Democrats.

There are still two weeks for voters to return absentee ballots before Election Day on November 3rd. Early voting for the Orlando municipal election will take place October 26-30 between 8am and 5pm at the Orange County Supervisor of Elections office on Kaley Street. There will also be early voting on Saturday, October 31st from 9am to 3pm and on Sunday, November 1st from 11am to 3pm at the SOE office.

2 Responses to "5,000 Absentee Ballots Returned in Orlando Elections So Far"