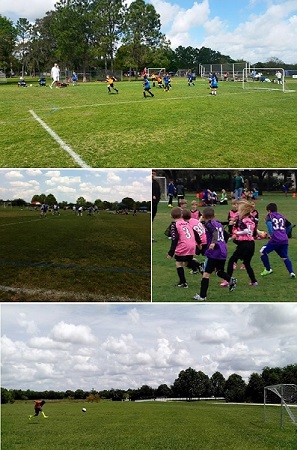 Orange County’s Barber Park at Lake George is a very popular park and is typically overcrowded on most weekends with families and children. An expansion to the park, desired by most residents for years, has been long overdue but remains stalled by Orlando Mayor Buddy Dyer.

It has been nearly two years since Orlando Mayor Buddy Dyer boldly promised city-owned land adjacent to Barber Park and Lake George to Orange County for new youth soccer fields. The Conway neighborhood has long wanted – and needed – an expansion to the very popular and usually overcrowded park, but Mayor Dyer himself is the one holding up the deal and preventing families and children from enjoying new soccer fields.

Dyer’s delay is also shocking considering how quickly he has made, and changed, agreements to make sure the Major League Soccer stadium deal gets done. It appears the Mayor is focused on satisfying private interests and his political supporters rather than the community he is elected to serve. But the worst part of Dyer’s latest political drama is the fact that children and families are the real losers.

“Every day during normal seasons, we have to turn away kids because we don’t have the capacity to create additional teams,” Kathy McCoy, volunteer for the South Orlando Soccer Club, told WFTV’s Lori Brown in April.

Is this another example of how Buddy Dyer focuses on downtown while neglecting the City’s surrounding neighborhoods and residents?

Dyer publicly offered the land in 2013 to Orange County Commissioner Pete Clarke in order to secure his vote for controversial Orlando Venues Interlocal Agreement. “I will make a public offer right now. If you want us to give you the land [Barber Park], we’ll do that,” Dyer told commissioners at the time. Clarke was the swing vote for the Venues vote, which included $20 million for the MLS stadium at the time.

According to a 2013 WFTV report, Clarke said he wanted to ensure the community got something back. “One of these kids could be playing at the MLS stadium 19 years from now,” Clarke said. But after two years, kids still can’t play because the Orlando City Council has not acted and Dyer has still not placed the item on the official agenda for a vote.

When I recently spoke with Commissioner Clarke about the stalled land deal, he was clear Dyer must live up to his word even though the Venues agreement no longer includes County funding for the MLS stadium, as team owners conceded and will finance the project privately.

“Our ‘agreement’ was verbal and on tape,” Clarke told me, “not a part of the written agreement so I feel it must be honored.”

Like most Conway residents, Clarke never imagined the deal would still not be done today. Clarke has called the process “frustrating” and said “it’s a long, long wait.” In April, WFTV 9 Investigates pressed Dyer and City Hall about the unfulfilled land deal.

The City of Orlando was essentially changing the terms of the agreement, causing more delays. Dyer now wanted Orange County to take arsenic contaminated land in addition to the land for the youth fields in order for the deal to go through. Residents may remember how Buddy Dyer promised five years ago to clean the arsenic from this area. After a development plan Dyer supported calling for townhomes on the land failed because of community opposition, Dyer promised the community the arsenic would be removed within two years.

We now know that never happened.

Orange County simply wants the 19 acres Dyer originally promised, which are not contaminated, so they can establish the youth fields. But Orange County also needs the City to sign off on the agreement to make it a reality. In April, the City of Orlando told WFTV that after years of delay, the item would be on the City Council agenda in May.

That never happened. Excuses were made every month by the City of Orlando, including to the Parks board. It turns out Dyer just does not want to let go of this land.

Now Dyer wants to lease the land to Orange County so that the City will still ultimately control the land. There are even reports from city staff that Dyer is insisting on being able to sign off on whatever designs or plans Orange County makes for the youth fields. This is not the agreement Orange County Commissioners thought Mayor Dyer was making two years ago, but then again shouldn’t they have known better given Dyer’s track record?

I asked Commissioner Clarke about the City not annexing the land to Orange County and if there were concerns about Dyer attempting to force Orange County to clean the contamination.

“Yes, I thought the property would be annexed so we could use impact fees,” Commissioner Clarke said. “An agreement for recreational easements will be ok, however we are still not willing to accept a portion of the property that still tests high for contaminants.”

Well, that should have been easy enough to come up with an agreement to allow the youth fields and park space to be developed, right? Not when Buddy Dyer is involved.

On June 1st, City of Orlando spokesperson Cassandra Lafser said about the land deal: “Nothing is changing. We are still moving forward with finalizing the agreement.  We expect to have this come to City Council at one of the meetings in June or July.”

At the end of June, Lafser then told me: “We are still working on finalizing the agreement.  We expect to have this come to City Council at the meeting in July.”

Last week, when the agreement was still not posted on the last July Orlando City Council agenda, Lafser then stated “We are still working on finalizing the agreement.”

It appears there are new city demands from Dyer that include Orange County mowing the adjacent city parcel and including Mayor Dyer and City Commissioners on the signage. Ah, pure politics at its worst.

Commissioner Clarke just wants it done. “I’m not hung up on that, I just want to build some soccer fields for the community.”

If this all sounds a bit ridiculous, it is. There is no reason for Dyer to delay this land deal any longer. There is a real opportunity for families and children in the Conway neighborhood as Orange County is waiting to invest millions of dollars into developing new youth fields. This is the investment these families deserve and the Mayor’s word should be good enough to get this deal done.

3 Responses to "Why Is Mayor Dyer Still Holding Up Barber Park Deal?"