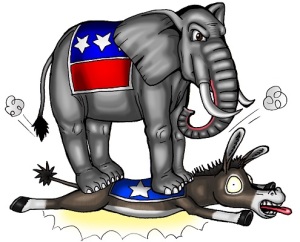 The local Orange County GOP is boasting about achieving 9 out of 10 of their specifically defined goals prior to the elections last week. The local Democratic electoral disaster was beyond a fiasco this year and it is another reason why on the left, it is time for change. This also raises the question as to why current Orange County Democratic leadership still seems to want to ignore how bad Election Day turned out to be.

The local Republicans laid out their strategy to members (and the public after emails were spread) this year and it seems to have unified and emboldened their members as well as encouraged better turnout to win in such a blue county. Meanwhile, Orange County Democrats continued to be run as an exclusive clique. Orange County Republican Chair Lew Oliver summed up the 2014 local elections in a message to membership now being spread across the County with the subject “An Historic Victory, Thanks to You.”

“Just as importantly, we accomplished nearly every single local priority we set together for OCREC,” Oliver stated. “So there you have it – the first 9 out of 10 local goals achieved, Florida even more Republican than before,” he added after recapping the nine local achievements.

Oliver’s boasting about the Republican Party winning 9 out of 10 of its local goals means those are nine tough losses for the Democrats that our local leadership is pretending never happened. Clearly, keeping Rick Scott in office was the Republican Party’s top goal, but the local GOP knew they could not win Orange County with the registration numbers. However, the GOP focused on the margin of votes and lowering the vote differential. But the local priorities are where Democrats need to reflect on local leadership and future direction.

“Our second priority was to keep the Orange County Commission 6-1 in Republican hands. With Bryan Nelson’s thumping win in Dist 2 – assisted by OCREC $ and volunteer efforts (per your vote) – we did that, too.” Democrat Alvin Moore’s loss was tough and could have been closer with more party resources and support. The local DEC has long complained about the Republican County Commission and these races should have been the top priority. Now the Commission is more Republican than ever.

“Our third priority was to defeat the pernicious, Democrat bought-and-paid-for County Charter Amendment C. We spent a huge amount of time, money and effort on that question and defeated it soundly, keeping the county commission safe for Republicans, and defeating the White House, Alan Grayson money, giant unions, Scott Randolph and – once again – a notorious traitorous political prostitute (who is not worth mentioning) in the process.”

Oliver credited the GOP ground game and grassroots efforts for three priorities, cleaning the house against three Orange County Democratic incumbents in the state house. Carlos Smith’s boss, now former Rep. Joe Saunders, was the center of the Democratic ground game and the Republicans boasted “but the real shocker – and a tremendous blow to the Democrats – was Rene Plasencia’s near-miraculous 2-point win in overwhelmingly Democrat State House District 49. The Democrats will be in shock for weeks on that one. And all of you helped make this happen by walking precincts for all 3 of those candidates.”

As the Democrats lost Question C, three other Republican initiatives in response to Randolph’s efforts saw big success. The Republicans featured their positions on all mailers and palm cards. “WE WON ALL THREE questions!!! Go Us!” boasts the GOP.

Lew Oliver ends his message with “This year we have some extra special things to celebrate.  I wonder how Santa gets a state house district under a tree…?”

Orange County Democrats need a change as much as the Florida Democratic Party needs change at the state level. We must build a real party. In addition to new local leadership not connected to the Randolph-Smith clique, the local Democratic Party should seriously consider a three-month transition with an “open enrollment” to allow time to recruit true representation from Democrats and minorities across Orange County (current membership is around an anemic 120 out of more than 300,000 registered Democrats in Orange County). Things have to change or there will be more boasting from Republicans in the very blue Orange County.