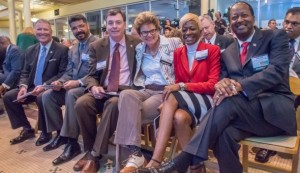 Over the last year, Orlando residents have faced a massive 17.7% property tax increase, substantial cuts to public services and an across-the-board 4.5% cut for every city department to close the city’s ongoing budget crisis. After years of mismanagement and out of control spending from Mayor Buddy Dyer and the rubber stamp City Council, new public records indicate the wasting of taxpayer dollars impacts every part of the overall budget, including the Orlando Police Department’s budget. In fact, Commissioner Regina Hill’s costs are so high, the city used three different OPD budgets, including budgets covering funding for special investigations and criminal investigations to cover her charges.

In just her first year in office, Commissioner Regina Hill charged taxpayers nearly $15,000 for overtime pay for two of her OPD liaison officers, more than the rest of the entire Orlando City Council combined. The $15,000 in overtime pay is in addition to the police officers’ salary of $35.35/hour, or around $73,000/year, according to the City of Orlando Workday data system.

OPD liaison officers for City Commissioners are normally paid using the Crime Prevention budget, which may surprise and irk taxpayers who expect their tax dollars to go towards actually preventing crime. However, Commissioner Hill’s expenses are so high, Hill has forced the City of Orlando to use money from the Police Special Investigations budget and the Criminal Investigations budget to cover her liaison officers’ overtime charges.

The Orlando Police Department budget consumes one-third (33%) of the overall city budget. Taxpayers understand the costs to keep our city safe, but questions are being raised about the use of “Special Investigations” and “Criminal Investigations” budgets to pay for Commissioner Hill’s charges. Is this really an acceptable use of public tax dollars? Should OPD investigations budgets be used in such a manner?

Given the ongoing budget crisis and out of control spending from the City Council, is it time to revisit the idea and cost associated with providing each City Commissioner an OPD liaison officer?

As Commissioner Hill spent nearly $15,000 in overtime costs for two liaison officers, on top of their $73,000 per year salary, the rest of the Orlando City Council spent less than $13,000 combined. To contrast Hill’s high total, Commissioner Stuart, who raised the most concerns on the issue, has only spent $400 on overtime charges for his liaison officer since June 2014.

The numbers show why Hill’s fellow Commissioners are getting concerned about spending habits and the public image of the Orlando City Council. Also, providing six liaison officers for City Commissioners costs OPD almost half a million dollars a year in salary and overtime pay.

Just last month, WFTV 9 Investigates exposed $50,000 that Orlando commissioners spent using city credit cards and public tax dollars. Sadly, the out of control spending without rules is not a new phenomenon when it comes to City of Orlando elected officials.

It appears several City Commissioners are ready to push for rules or regulations around the spending of public tax dollars by their fellow elected Commissioners – and it is about time considering the tax hikes and service cuts Orlando residents have been forced to endure. Will Mayor Dyer join with concerned residents and Commissioners to reign in the spending?