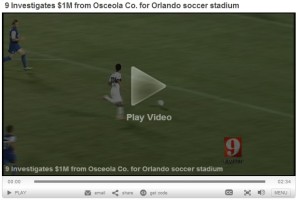 As another investigative report shines more light on the Orlando City soccer stadium deal, it is becoming clear that Orlando Mayor Buddy Dyer used payoffs and questionable promises to secure money and support for his sweetheart deal to happen. The latest revelation comes from a WFTV 9 Investigates report around Osceola County’s $1 million contribution to the stadium effort.

According to the report, documents were given to Osceola County commissioners the day they decided to hand over $1 million for Orlando City Soccer, which included a letter from Buddy Dyer pledging his support of a plan to extend Osceola Parkway. Eyewitness News’ political analyst Rick Foglesong explains in the story Dyer went too far:

Does this letter give you the impression the mayor’s vote is for sale?” Channel 9’s Nancy Alvarez asked.

“Yes, it absolutely does. This is a quid pro quo that’s being arranged. The mayor is saying he’ll help at Metroplan to do something Osceola County wants in return for Osceola County doing something for the city of Orlando,” Foglesong said.

The investigative report goes on to detail a “mystery event” at the Amway Center in the works by Dyer to benefit Osceola in addition to Dyer’s pledge to move their transportation interests forward on Metroplan for their support of his soccer stadium in Parramore.

We already know how Dyer crossed the line during the Orange County Commission vote when he basically bribed County Commissioner Pete Clarke with an offer to give the county a park. Dyer of course can’t offer things like that without City Council approval, but since he controls City Commissioners like puppets maybe he forgot.

Clarke quickly caved and forgot all of his prior concerns and statements on the deal to be the crucial fifth vote for the stadium after Dyer shouted his deal out. We also know that Orange County Mayor Teresa Jacobs received special beneficial treatment from the soccer team officials and the owner even gave Orange County 1,000 free tickets among other things.

The latest Dyer quid pro quo raises even more questions about how business is conducted in Orlando as well as what this mayor really does behind closed doors.

One thing is more clear than ever, the whole MLS soccer stadium deal smells of bribes and payoffs.