You are here: Home › City & County Relations › Say It Ain’t So: Another New Stadium in Orlando? 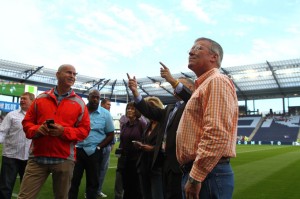 Orlando is essentially broke. The city dipped into the reserves to the tune of around $30 million to “balance” its budget just weeks ago. Our credit is maxed out, literally. Mayor Buddy Dyer had to get Orange County to bail him out just to get the Citrus Bowl renovations started.

But now, that’s not enough. Mayor Dyer wants to build another new stadium in Orlando for professional soccer, a team that already uses the Citrus Bowl. It does not even make sense to have this conversation right now given the economy and the status of the sport in Orlando.

We have to start being more honest. The Orlando City Lions are an amazing team. They have brought great excitement in regards to soccer to our community. I played soccer my whole life and two of my brothers played for our high school team. I get excited every World Cup and wish we had more soccer fields in the city limits so every kid could have the fun I did.

But here are the facts. The Lions drew an average of 5,500 fans per regular-season game last year. Now they want a stand-alone stadium to seat up to 20,000 fans. This would be another $100 million project – and we all know Orlando’s record with running over budget. It would also likely move the team out of downtown and out near the Convention Center.

We are about to spend hundreds of millions of dollars on renovating the Citrus Bowl. For now, if that money is going to make the Citrus Bowl good enough for College Bowl games, it should be good enough for our soccer team to continue playing there. It also keeps professional soccer right in downtown Orlando where we need to continue to draw more and more families and fans.  This is a lose-lose for Orlando.

I agree we must do more to promote the sport, the success, and to provide more opportunities for children to play soccer in Orlando. But that does not mean spending $100+ million on a new stadium.

One Response to "Say It Ain’t So: Another New Stadium in Orlando?"